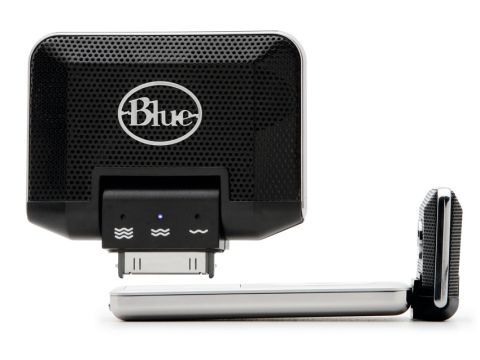 Every music-making iPod owner should have one. And there's an updated model in the pipeline that officially works with iPhone, too…

Apple iPod user? Can't be bothered with a portable field recorder or multitrack, but want better audio quality than a dictaphone? Blue has the answer.

The company behind those extremely desirable studio microphones has come up with Mikey, a stereo condenser, cardioid-pattern microphone that attaches neatly to your iPod (or iPhone - see below).

It doesn't require any software; simply plug it in, angle into your position of choice and select a recording application such as Voice Memo.

Mikey has three sensitivity settings to enable a good recording level regardless of the source. We've recorded artist interviews, rehearsals and even a gig with impressive results. A pair of Neumann U87s it isn't, but it's infinitely better than you can expect from the iPhone or iPod's built-in mic.

A couple of practical considerations: like all sensitive condenser mics any extraneous knocks or vibrations will cause a loud thud on your recordings, so be careful where you place it. Also, it's worth setting your iPod not to auto lock the screen as unlocking it again can stop the recording. it's not officially supposed to work with iPhone, but it works with this reviewer's 3G no problem.

Mikey's frequency response is a claimed 35Hz to 20kHz, with a sample rate of 44.1kHz/16 bit, which means you get CD audio quality, even if Apple's Voice Memo software does knock it all down to mp3 quality.