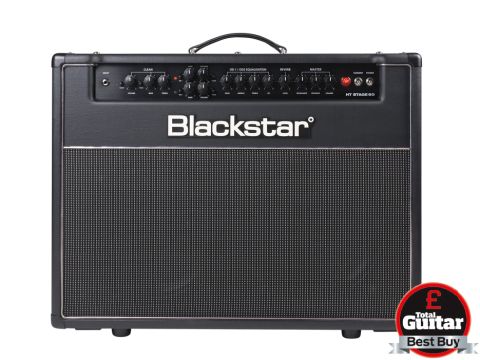 This workhorse gigging amp will pay for itself.

Blackstar's HT-5 combo and HT-5H amps were on wishlists everywhere when they launched in 2008, and the company went on to deliver pro rock tone with its Series One range. But if the Series One pricing still feels like too much of a stretch, the new HT Venue selection aims to put all-valve versatility within reach of even more players.

There are six amps on offer, ranging from 20 to 100 watts in power. We've got the largest combo in the range, the Stage 60, here.

A glance at the spec sheet confirms the amount you get for your money: three channels (each with selectable voicings), dual 12-inch Celestion speakers, Blackstar's ISF (Infinite Shape Feature) control, digital reverb, a speaker emulated output, plus two ECC83s, one EC82 and two EL34 valves in the driving seat.

The clean channel has a two-band EQ, but just as important here is the Voice switching. In the 'out' position, you get Blackstar's British Class A voicing; push the switch in for Dynamic US mode. The British voicing gives you a wider, more open sound that crunches up towards the top end.

If you like your clean sound with a gritty edge you'll find it here. The US voicing, on the other hand, stays cleaner at higher levels with a boost in the low end and (to our ears) a cut in the mid range that lends itself to crystal clean metal tones.

Push some single-coils through and you've also got a spiky funk sound with extra attack. Both overdrive channels have voice switching too, plus a mid range EQ and the ISF control.

By experimenting with different gain, EQ, ISF and Voice settings (Classic and Modern), OD1 takes you from old-school punk strumming to a Sabbath-esque grind. OD3 gives extra gain in standard mode, and can function as an alternative rhythm channel for higher gain settings or can be set up for lead sounds.

The overdrive EQ section is shared between the two channels, but pressing in OD2's Voice switch delivers a kick to the mid range for extra cut - ideal for boosting solos if you're using it for a metal rhythm sound.

The full list price of £699 offers massive bang for your buck at a time when bean counting threatens to limit our gear spending. The 60 watts of valve power combined with the speaker configuration is perfect for a mixture of medium to large venues.

Heavier players might want to opt for the extra trouser-flapping abilities of the Stage 100 head and cab, but with this many tonal adjustments at your disposal, it's difficult to think of a musical situation where the Stage 60 wouldn't cut it.