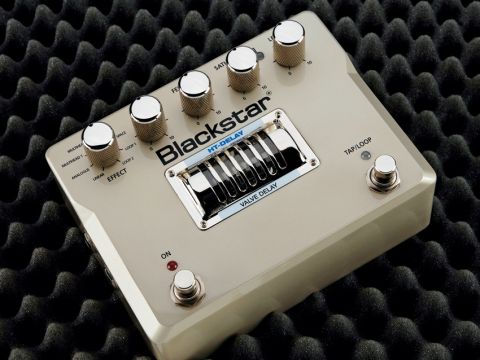 A versatile delay that offers a range of additional tonal options.

Blackstar has made a strong impact since its relatively recent arrival into the guitar world, with its highly successful range of affordable amplifiers and also the HT range of overdrive/distortion pedals.

The latest attempt by the company to branch out is the HT Effects series, which features the HT-Delay delay pedal we have here, as well as the HT-Reverb and HT-Modulation pedals.

The HT-Delay uses digital technology to create a flexible range of delay effects, while incorporating a high-voltage valve circuit into its design to impart the valve dynamics and harmonics that Blackstar claims is typical of a vintage tape delay input circuit.

Powered by a supplied 22V mains adaptor, it is a weighty, solidly constructed pedal with twin footswitches for effect on/off and tap tempo.

A rotary knob selects one of the eight delay types: a full bandwidth digital delay, an emulation of a vintage analogue bucket brigade delay, two different rhythmic delays based on multi-head tape echoes, a tape delay emulation with modulation and 'space', which is simply described as a complex vintage tape echo effect.

The final two types are actually loopers. Loop 1 is a one shot/loop playback delay of up to 7.2 seconds while Loop 2 is a 'sound on sound' delay looper.

There are knobs to control the delay time, feedback and level, while a fourth knob turns up the level of saturation supplied by the valve - signalled by an LED glowing green through orange to red.

The range of available delay types covers plenty of practicalities for guitarists and all sound really good, with a natural tonality that sits well with guitar.

For straight delays, the digital delay is as clean as expected, the BBD emulation offering the diminishing top-end of the originals, while modulation confers some authentic 'wow and flutter' flavour on the tape emulation.

The other delays offer a more complex set of repeats. Limited to just three of the potential virtual head combinations/ spacings that could have been used, Blackstar has chosen ones that work well, but some might disagree with that choice.

Delay times range from tasty slapback up to much longer stuff - up to 1.5 seconds via the knob, but up to three seconds (except for the multi-head settings) if you use tap tempo.

Far from being just window-dressing, the one thing that sets the HT-Delay apart from the pack is that glowing valve.

The vintage emulations can be made to sound just that bit more realistic by turning up the saturation control, which adds valve gain and compression to the repeats, thickening them up and potentially making them more distorted - the harder you play, the crunchier they get.

This is no bad thing, as the dynamic control over the repeats lets you inject extra expression into your playing.

There's a wealth of choice in delay pedals at the moment, ranging from units that do one particular thing through to ones that aim to cover a number of bases.

The Blackstar falls into the latter category by offering the versatility of different delay types, looping and tap tempo, but it also does its own individual thing by virtue of the valve saturation.

It's not the only valve-equipped delay pedal out there but it's the most accessible - the others being either harder to find in the UK, or much more expensive.

So, if the idea of being able to dial-in a degree of distortion for your repeats appeals, this is probably the pedal for you.