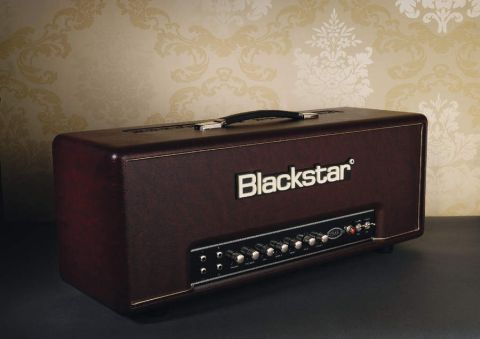 If you do nothing else in 2008, check out Blackstar's amps and effects - this head will blow you away.

Blackstar's A100 head is probably the most eagerly awaited of the new Artisan range, due in part to the fact that its designers formerly worked for a very well-known amp manufacturer in Bletchley and know more than a thing or two about making great-sounding rock guitar amps.

So it was with high anticipation that we turned up at a Milton Keynes rehearsal studio to meet the A100.

Where Blackstar is concerned, appearances are certainly not deceptive. Sat atop a matching 4 x 12 cabinet, the A100 looks like a serious pro rig, and that's exactly what it is.

Like the A15 and A30 combos, the head is built to an exceptionally high standard, with a solid 18mm birch ply sleeve surrounding a beautifully finished chrome steel chassis.

The electronics are hand-wired using a turret board - basically a strip of insulating material into which two rows of small nickel silver posts are pressed.

The capacitors, resistors and diodes that make up the A100's circuit are soldered to these posts, with a fair amount of wiring connecting the front and rear panel controls, and of course the valves.

The standard of soldering and wiring is as close to perfection as we've ever seen - on most amps like this you can tell at which point the soldering started and finished by how neat it is.

However, on the A100 every single solder joint is perfect, with the wires carefully bundled, twisted and pushed into the chassis corners to minimise hum.

The A100 is very much a traditional valve design and at first glance follows the standard 'Plexi' control layout quite closely.

There are two channels, each with a pair of high and low sensitivity inputs and separate volume controls. These feed a standard three-band EQ, which is followed by a four-position voice switch and a presence control.

On the rear panel, you'll find a pair of loudspeaker jacks and an impedance changer.

In keeping with the traditional design, features like effects loops, boost switches or headphone sockets are noticeable by their absence - like other amps in the Artisan range, the A100 is very much one for the purist.

Overall, the build standard is quite exceptional at this price point. Attention to detail is evident and it's clear to us that Blackstar's Korean factory staff love building these amps.

As we mentioned above, the A100's Channel 1 is voiced to be a 'ready-jumpered' 'Plexi' and delivers a perfectly balanced tone that's neither too shrill nor too fat, with none of the high frequency garbage that afflicts many amps of this type.

Using a Strat fitted with standard, medium-output single-coils, this is something that's immediately evident - all the highs are there, but even at serious power levels the A100 doesn't separate your fillings from your teeth.

And we mean serious: with transformers big enough to power a small village let alone a guitar amp, the A100 is blessed with gargantuan headroom.

If you swap to the Fender-voiced Channel 2, every nuance of your playing is reproduced with stunning clarity.

With a decent humbucker-powered guitar and the voice switch on its highest gain setting, the A100 can be pushed into a powerful crunch at levels that shouldn't overpower an averagely loud band.

Or you can use the voice switch to raise headroom for a fabulous clean sound and then add your choice of pedal for distortion.

We tried Blackstar's HT Dual, which incorporates a two-stage switchable overdrive and a bypass, effectively turning the A100 into a modern fire-breathing three-channel monster.

The transparency of this pedal means that it's easy to dial in practically any sound you want to hear from early Townshend-era power chords to Gary Moore's endless sustain, and all with total authenticity.

As with Blackstar's A15 and A30 models, the A100 head is a stunning debut into the world of high-end guitar amplification.

Designed to appeal to the purist and best-suited to classic rock and blues, this definitely isn't an amp for the bedroom hero - it's at its best when cranked up loud and the pro-level build quality means portability is a secondary concern.

On its own, it isn't the most flexible amp out there - but add a Blackstar pedal or two and the A100 can take you practically anywhere you want to go.

It looks expensive, because it is. Even today £1,600 is a lot of beans for a guitar amp and cabinet, but remember that this amp is totally hand-wired and built to last forever.

If tone is everything to you, every classic rock guitar sound you ever wanted to hear is lurking inside that chassis - all you have to do is plug in, turn up and stand back.