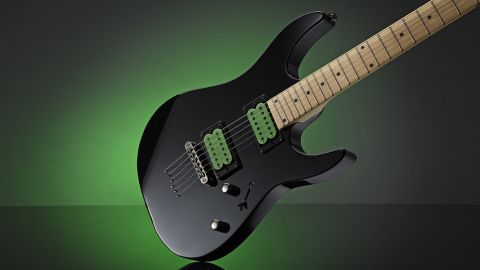 Tuning and intonation problems aside the CL-22M is a solid first guitar.

For any budding young shredder looking for their first guitar the CL-22M is an attractive prospect. The combination of a svelte and speedy satin-finished maple neck, a carefully contoured double cutaway body and a pair of powerful humbucking pickups is a template many great guitars have been built on.

Of course, we've seen plenty of spec-heavy axes made or broken by the tiniest of details, and at nearly £200 this Knight is going to have a fight on its hands in the face of some stiff competition.

One of the first tests with any budget guitar is balance, and sat on the lap for the first time the CL-22M doesn't disappoint. It's lightweight (thanks to the agathis body) but at the same time very sturdy, with the neck being securely fitted and the strings running through the body for extra reinforcement and sustain.

The satin-finished maple neck feels silky smooth to the touch, with a nice wide radius that's perfect for sweeping picking and tapping antics. There's also a decent curve to the carve, so you're not left with an Ibanez or Jackson-like flat section at the back. Unfortunately, after extended play we found that the wood had started to display black marks, likely a combination of dirt and wear from the strings. It won't impact playability, but you might want to keep a bottle of fretboard cleaner handy.

The frets, on the other hand, have been nicely polished to a good standard - more than can be said for some of the Black Knight's rivals.

Get it set up

Strings bends are smooth and the action set at a sensible height, but unfortunately a few minutes of playing reveals a poorer setup than a first impression might suggest. Crucially, the CL-22M suffers from some intonation problems, making chords and single note runs further up the neck occasionally sound out of tune.

Tuning stability is also an issue, with string bends often knocking the tuning out by a significant amount on the higher strings. This appears to be mostly down to excess friction on the nut, causing the strings to stick when you're trying to tune them, only to fly out of tune again once stretched.

It's a problem that can easily be solved by a good setup in your local guitar shop, but it's also an extra cost to consider that takes the guitar well above the £200 mark.

Tuning issues aside, plugged in the CL-22M's twin humbuckers provide a very solid set of tones that should bring a smile to the face of any rock or metal fan. Clean tones are warm and rounded in the neck position, perfect for arpeggiated chord sequences.

Introduce a bit of dirt and you're greeted with a fairly generic but perfectly acceptable rock grind that's perfect for punk and hard rock. Wind up the wick to metal levels and the pickups soon start to become a little bit overwhelmed, but the tone is far from unusable. Pair this guitar with a decent amp modeler and you'll be able to cover a lot of ground.

Ultimately, the CL-22M is very much a tale of two halves. For such a comfortable and playable guitar it's a shame that a few key areas of the hardware and setup have been overlooked. We feel this guitar does need a setup before it can be properly recommended, and by that point you're working towards the price of an Ibanez, Washburn or Yamaha.

Regardless of the niggles, though, the CL-22M is still a quality guitar built on a solid template that many young rockers will appreciate, especially if you can catch it at an even more reasonable street price.