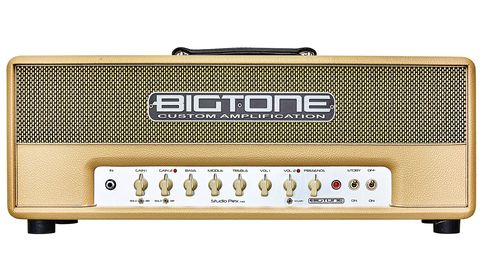 Aimed at pro players and serious amateurs, we reckon Bigtone has a big future. One to try.

Spain may not be the first country you associate with top-end guitar amps, but that's changed, thanks to the arrival of Bigtone Custom Amplification.

Based in beautiful Valencia and founded in 2009 by José Manuel Torrelo and Octavio Valero, Bigtone is pitched at the top end of the market, with price tags to match and some mouth- watering products. This issue, we're looking at one of its most popular designs - the Studio Plex 22 head.

The amp is built to a very high standard, with impeccable vinyl work and a smart co-ordinated design that hangs together well. The lettering could do with being a little clearer - it's hard to read until you're quite close to the panel - but, this aside, the amp has clearly benefitted from a lot of thought and R&D. It certainly looks the part and the attention to detail goes right down to component level.

Inside the welded aluminium chassis, the  head uses printed circuit boards, but these boards are manufactured to a very high standard: they're double normal thickness, with much heavier copper traces.

There  are separate boards for preamp, power amp and power supply, with a couple of smaller ones for the rear panel switches and sockets. Underneath a funky black solder resist covering, the PCB layouts are clean, neat and clearly done by someone who knows a lot about valve circuits. Despite the heavy reliance on PCBs, there's still a lot of wiring, done to a standard more often seen on high-end professional audio gear, with wires tied together, carefully bent and routed.

The Plex 22 has two footswitchable channels with separate gain and volume controls plus a shared EQ. There are separate channel pre-EQ switches that offer a choice of bright, normal and bold voices, an overall hi/low gain mode switch and a master presence control. The power amp's response can be tweaked from the rear panel with a negative feedback on/off switch and a control called 'deep', which varies the amount of low-frequency punch.

It powers on smoothly and very quietly, with almost inaudible hiss and hum. As you might expect from the name, the Plex is geared more towards 'British' amp sounds, with a tight, focused bass, punchy midrange and glassy treble. The Plex sounds equally good with single coils and humbuckers - there's no bias and both amps have sufficiently wide range to handle any guitar.

The bright/neutral/bold switches on the Plex 22's preamp channels significantly expand the amp's range and make it easy to dial in rhythm and lead sounds, without having to compromise one against the other, while the negative feedback and deep controls add extra punch when needed.

Bigtone is gaining a lot of recognition worldwide, partly thanks to its association with ZZ Top legend Billy Gibbons.

The  Plex 22 compares favourably with many top boutique brands for price, and we think you're getting a lot of amp for your money, with top-drawer build quality and righteous tone.