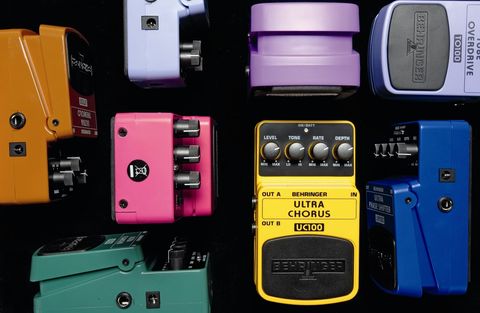 Great value for money but it might be worth shelling out more for something a bit more inspirational.

Behringer kicked up something of a storm at the Winter NAMM show earlier in 2005 with a new range of compact effects pedals that were rather unashamed clones - visually, at least - of established BOSS counterpart designs, even down to colour coding for the various effect types.

The threat of litigation from Roland precipitated a swift cosmetic redesign, and finally Behringer's stompboxes have hit the shops.

This would be relatively unremarkable in an industry flooded with a glut of 'copy' products, were it not for the fact that Behringer's new pedal range starts at just £15.

Yes, that's right: a stompbox for less than the cost of three sets of strings or a high-quality capo. An initial glance at these units proves that it doesn't exactly take a degree in electronics to spot the corresponding BOSS model that seems to have, ahem, inspired their design.

For example, compare the Ultra Distortion to the BOSS DS-2, or the Ultra Tremolo to the BOSS TR-2 and so on. That said, we'll obviously judge these Behringer units on their own individual merits.

The electronics themselves are housed in plastic that is approximately 2.5mm thick and, while not as kick-proof as a diecast casing, it is robust enough to endure vigorous stomping.

Battery access is achieved by depressing the black plastic hinges in with a ballpoint pen or similar pointy tool. This is no major headache; although it's worth taking care when reassembling the unit to make sure that the spring lines up correctly with the small plastic notch that holds it in place.

The switching system doesn't feel quite as solid underfoot as a BOSS unit, but on the other hand we found it much more confidence-inspiring than the plastic switches used on some pedals, so it's all relative depending upon whether you are a Vinnie Jones or a Ronaldinho when it comes to onstage footwork.

Clearly we aren't in audiophile territory here, but there can be few complaints about the build quality for the money.

For example, the plastic knobs grip the pot shafts tightly enough to ensure that they won't easily go astray, and this is something basic we've not seen on pedals in recent months that are much higher spec and considerably more expensive.

Our first foray into Behringer's modulation pedals proves less than entirely fruitful. In mono mode straight into the amplifier, this is a pretty uninspiring, generic chorus sound that reminded us of the less musical end of the early nineties digital multi-effects processor spectrum.

The stereo option widens the appeal and inevitably the scope of the sound somewhat, but the voicing remains disappointingly bland.