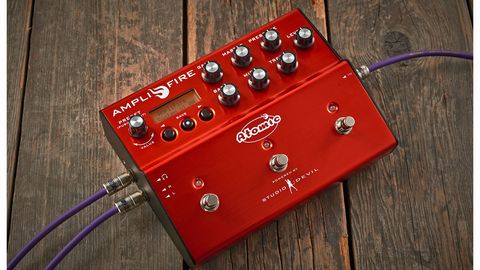 The AmpliFire lends itself to headphone-connected practice and might provide instant rock-in-a-box sounds for recording, too, as well as possible scope for live work.

Rather than using a conventional amp at a gig, there are a number of more compact and portable digital-modelling options loaded with amp and effects sounds that can be connected directly up to a sound system or to your own speaker cabinet.

Atomic is a company that knows all about that, as its best-known product is the CLR Reference Monitor, a full-range powered monitor that's often seen partnered with the high-end modellers such as a Kemper Profiler, Fractal Audio Systems Axe-Fx II or Line 6 Helix.

It may seem a natural step, then, for Atomic to come up with its own amp-and-effects modeller to take on the likes of Kemper, Fractal and Line 6 at their own game, and the company has done it with the AmpliFire, a relatively compact stompbox unit with a pretty straightforward user interface.

While the AmpliFire is a fraction of the price of some of its high-end competitors, it features the same sort of under-the-hood clout through two SHARC DSP processors and Cirrus Logic converters.

The unit's sounds are provided by Studio Devil, long-time producers of computer-based amp simulation software, who have created the amps, effects and speaker simulations. AmpliFire also has the ability to load third-party cabinet impulse responses for realistic sound.

AmpliFire is robust, featuring a mono input, and a variety of outputs to send simultaneous signals to a PA/mixing desk and your amp/powered monitor. There's also a headphone socket, an effects loop for connecting other pedals into the system and an aux input to bring in backing tracks for practice.

Three footswitches can be programmed for tasks such as changing presets, bringing effects in and out or changing a preset's parameters.

Editing the 128 presets is easily carried out from the front panel, but the free software editor makes everything faster and easier. There's not a massive amount of different modelled gear here, just a few well-selected amps - including familiar classics and newer stuff such as a Cornford. More will be added via regular firmware upgrades.

Factor in effects that cover all the popular genres and a signal chain with pre- and post- elements including parametric and graphic EQ options, plus any uploaded IRs, and there's a lot of scope to create a variety of sounds via tweaking the appropriate on-board parameters to your liking.