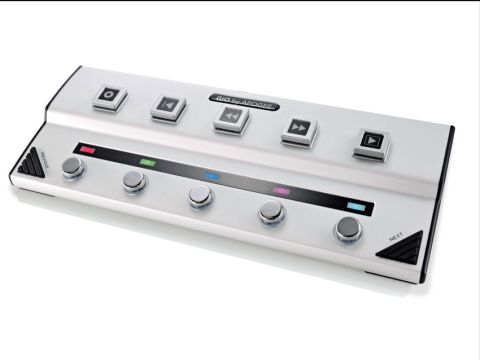 Should definitely prove a popular choice for guitar- and Apple-based musicians and producers.

Almost a year ago the team at MusicRadar's sister magazine, Future Music, were summoned to Apple HQ for a sneak peak in to all things Logic Studio. That day focused on Logic 9, yet our insiders also came back with reports that an intriguing shiny silver box lay on the floor in front of their demonstrator - through which he recorded his guitar and controlled Logic's then new PedalBoard plug-in.

10 months later and the same box is now in our studio. The device in question is the Apogee GiO interface and control surface, which has been built especially for Apple's countless guitar-based producers and composers and which offers audio I/O alongside a controller optimised for axe-wielders.

Getting started GiO's rear-panel provides its I/O options, with a USB port for connection to your computer, a quarter-inch 'Instrument In' for your guitar, an output to send to your speakers and an optional MIDI expression pedal.

GiO features a high-impedance input for your instrument but doesn't feature a gain dial, with input levels set via the 'Sound' panel within Apple's System Preferences. A/D conversion is provided at 44.1 or 48 kHz and at 24-bit and, as you'd expect from Apogee's proud history, sound quality is great.

Installation of GiO is simple - a DVD gives you access to the installer, which requires your details for authorisation via entry of the serial number and your email address.

Pedal to the metal

GiO's control surface is simple, yet very effective. At the top of the unit five transport buttons provide Record, Return to Zero, Rewind, Fast Forward and Play/Stop stomp buttons so that you've got easy-to-access control over Logic while wearing your guitar.

Below this row, another of five wait, with on/off bypass switches which are principally designed for integration with Logic's PedalBoard plug-ins.

Above each of these 'foot-buttons' a bold LED gives you a colour indication of any PedalBoard effects you set up. Step on one of the Bypass buttons and the LED 'mutes' with the plug-in. If you pick up your mouse and re-order your effects, the lights instantly re-order too.

By now you're probably thinking 'well, that still means you're spending as much time with the mouse as you are with the interface' and you'd be right. Except, GiO's final two buttons allow you to step to the 'Next' or 'Previous' plug-in preset, so provided you're happy to either step through Logic's own vast library of plug-in possibilities or to spend some time configuring your own, it should pretty quickly be the case that you're free to record, stop, go back to the top and punch in and out the effects you want.

Provided you've thrown Logic's Automation into one of the 'record' modes like Latch, any stomp pedal on/off action you produce during recording will be written along with your audio.

Personally, we'd love it if GiO shipped with one or two rocker pedals attached to its end panels so that as well as recording bypass messages, you could also assign a parameter of choice to a currently selected pedal (wah and volume being obvious examples) and record changes to it in real-time as you recorded audio.

The rear-mounted expression pedal option provides access to precisely this level of control but we'd like this by default, please Apogee. More of a pleasant surprise was that, beyond control over the obviously guitar-based effects plug-ins, the 'Previous' and 'Next' buttons let you scroll through the rest of Logic's plug-in presets too.

Here's how it works: If you highlight a Channel Strip preset, these buttons scroll through Logic's lists, thereby changing all effects in your strip, whereas if you highlight a specific plug-in, its own 'personal' preset list will be scrolled through. This is intuitive and quickly leads to trying out effects in conjunction with your musical ideas, rather than whacking down a recording and then spending endless time flicking through effects possibilities afterwards.

GiO is simple yet effective. It provides fuss-free control over the things guitarists want when laying tracks in Logic or GarageBand or controlling effects in MainStage and with its rugged construction, GiO promises much for the guitar-based Logic Studio or GarageBand based producer either in the studio or on stage.

It won't completely divorce you from your mouse and I'd recommend attaching an expression pedal to take effects control beyond the simple 'on/ off' but if your priorities are sound quality, reliability and immediate integration, this could be the answer guitar and Apple-based producers have been looking for.