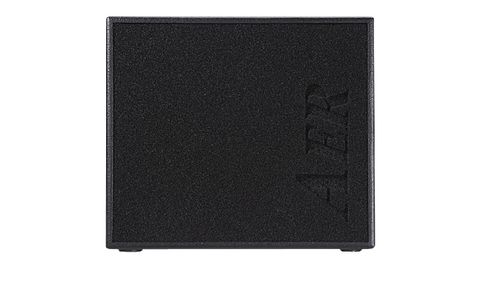 Germany's AER takes a highly technological approach to design and manufacturing, albeit fired by a core belief that the ultimate goal is to make tools for musicians to just get on with playing. One of its most popular models, the Domino, has been recently updated, so let's take a look at the revamped amp…

So far so good, but as ever with wattage and guitar amps, the numbers rarely give any meaningful indication of volume. What's interesting in AER's case, proven over many versions of its amps, is that its dynamic power amp control, using a complex system of filters and limiting, puts those watts over in an incredibly efficient manner, sounding super clean and clear all the way: the Domino 2.A will fill far bigger stages than its size suggests, or act as complete guitar-and-vocals sound reinforcement for pub shows.

Underneath the very modern looking, tough black acrylic coating, the cabinet is actually birch ply, not particleboard. While being a better choice for sound in AER's opinion, it also helps keep the weight of the amp down; just under 13kg.

Another big plus in any one-box amplification solution are in-built effects. Thus the Domino 2.A has 16 effects on offer; a wide selection of reverbs, delays and choruses, each channel with its own level control so you can have more or less effect (or indeed none) in each separate channel.

Shall We Plug In?

Every input has a corresponding gain control to set your ideal input levels and the various bass, treble and mid pots do exactly what you'd expect. Less obvious is the 'colour' button that appears in channels one, two and four. It changes the midrange response considerably which can be useful depending on what kind of instrument/pickup you're using, and indeed to suit different playing styles that either need to cut through, or sit back in a mix.

There are no parametric EQ controls, it's interesting to note, so if you do have a very specific troublesome feedback frequency, it'll need to be dealt with elsewhere. That said, we took the amp on a variety of bigger- and smaller-room gigs and found the onboard EQ more than capable of dialling in the sound we wanted, without any significant feedback problems when using a variety of common under-saddle and soundhole pickups.

The amp has XLR inputs/channels in addition to the expected 6.3mm jack. Optimised for mics or line-level sources, it means you can plug in pretty much anything, including microphones, preamps, DIs or what have you, for full-range sound reproduction. Phantom power at +48 volts (switchable via the front panel) is also supplied if you want to use a condenser/capacitor mic for singing or instruments. It's also worth mentioning that the jack inputs (channels one, three and four) can be supplied with phantom power if your guitar can take it. A qualified tech needs to switch this on inside the amp.

The Domino operates in mono although it will do a stereo emulation via a switch on the top panel, but only via the associated left and right jack outputs. It has no effect on the amp itself, but if you're feeding a couple of powered PA cabs as part of a bigger system, the stereo simulation gives the sound a wider feel, especially when using effects. Helpfully, the amp's 'pre master' pot gives you independent control of your direct-out signal volume.

It's worth noting that the DI out happens before the effects sections (so there are no effects in your DI). If you want effects included in your direct output, use the line out jack socket. It sounds more complicated than it is; the more important point is that it's great to have plenty of options, depending on what the out-front engineer wants.

Finally, there are direct outputs for a tuner, headphones (main speaker is muted), a send and return loop for outboard effects, plus stereo phono inputs for a CD/mp3 player and stereo phono 'record' outs.

Plugging in a couple of electro-acoustics - one with a Fishman under-saddle system and the other with Taylor ES1 - the first impression is of a modern, hi-fidelity presentation. The onboard EQs are powerful as overall shaping devices, but you get the feeling that the AER amps aren't designed to 'colour' the sound in the way that an electric guitar amp would do. This amp is presenting what it 'hears' from the guitar in as clean and natural way as possible.

That's a double-edged sword, of course, because if you have a rudimentary pickup system that sounds harsh and unnatural, there's not a great deal the AER will do to 'save' it. Conversely, the level of dynamic range and sheer frequency response does give high quality pickup systems the best chance possible of sounding natural; if you put up a high quality condenser mic, for example - sing through it or play your guitar - you'll hear the AER's inherent quality, loud and crystal clear. Don't be scared of that high end, either. When playing in a band, or using the amp as a small PA, those are the frequencies that will get you heard clearly and with high fidelity.

Engaging the colour control ushers in a dollop of lower-mids that can add plenty of girth to fingerstyle playing, and serves to lessen the impression of the crystalline high end. You might find that it's a step too far with certain soundhole pickups, but a real boon for thinner- sounding piezos. Being totally reductive, you might even say it sounds more 'vintage'.

The Domino 2.A presents a significant soundstage: get it raised up - shame there's no pole mount in the bottom - and it comfortably fills a small pub with guitars and vocals, despite being only 16 inches across. For guitar only, it'd be a formidable monitor/backline on stage.

Effects add a very welcome ambience to proceedings, underlining the 'modern' nature of the sound with generally lush, deep reverbs that flatter vocals as much as they do solo guitar. You might bemoan the lack of editability, but we'd say AER has struck an ideal balance of simple usability and sound quality. If you want something more specific, there's always the effects loop.

The Domino 2.A offers loads of input and output options, and enough power to essentially give you a mini PA in a laughably small box that can cope with small pub/club gigs effortlessly.