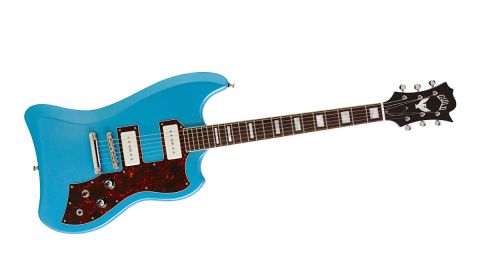 If you’re looking for something a little leftfield, this vision is certainly that.

We guitarists remain a conservative bunch, don’t we?

Of course, Gibson’s modernistic ‘shapes’, the Flying V and the Explorer, have passed into the mainstream despite being ridiculed on their late 50s release, likewise the reverse and non-reverse Firebirds. But many other, err, oddly shaped guitars lie in cupboards, under beds and in dusty shop corners.

What were those guitar designers - or in indeed artists - thinking? Guild happily joined in the alternative shape craze in the swinging 60s with the S-200 Thunderbird, in stark contrast to its ‘stuffy’ archtops and semis. It appeared in 1964 and ran through to ’68 before Guild swapped its shape for a more conservative Gibson SG-like style.

Under the current Newark St Collection banner, made in Korea, the guitar was re-released last year as the S-200 T-Bird, complete with its Jazzmaster-inspired dual-circuit controls and the original-style Hagstrom vibrato.

Earlier this year, Guild released a trio of ‘ST’ models with more stable tune-o-matic bridge and stud tailpiece, and a colour-dependent choice of either Franz-style soapbar single coils or Guild LB-1 mini-humbuckers and simplified controls.

The T-Bird, shape aside, follows a very Gibson-esque formula: 629mm (24.75-inch) scale length, dual pickups and that bridge/ tailpiece setup along with all mahogany set-neck construction.

From the base of the body to the tip of the headstock the guitar covers around 1,016mm (40 inches), which is about 38mm longer than a Stratocaster. The T-Bird goes for a slightly thinner and more uniform depth of 39mm with SG-like edge chamfering along with a noticeably lighter weight. In fact, this one is over a pound lighter than the original T-Bird we looked at last year.

Strapped on, the T-Bird hangs really well. The Guild is straightforward with bridge, both and neck selections via the three-way toggle. The T-Bird’s Franz soapbars (the long-defunct US company that made the original pickups) present relatively low-output voices that retain a clear sparkle yet do a good ‘hot Strat’ impersonation, and with a little mid-boost, a thicker classic LP Special grunt.

Yes, there’s hum pick-up - aside from the mix, which is hum-cancelling - but here’s an easy-to-dial-in sound that jangles, retains clarity with crunchy gains and offers a nicely vocal, not overly mushy neck pickup voice.

As its 60s origin suggests, the T-Bird is a classic-sounding piece and in this ‘ST’ format it’s hugely tempting, without the tuning issues we experienced with the vibrato version and with way more simple-to-use controls.

This is a very showy piece, not for the conservative, shy and retiring among us - and is well priced and fit for purpose. So are you brave enough to take it for a spin?