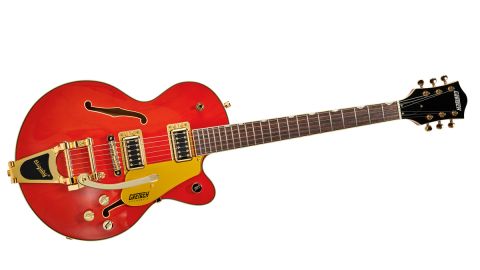 What’s not to love? There’s every chance our little orange crush could be your next big squeeze.

Whenever we’re presented with a new Gretsch guitar to review, we always remind the reader that these things aren’t just for rockabillies.

This is closely followed by the obligatory wheeling out of non-rockabilly Gretsch icons such as Small Faces and Humble Pie genius Steve Marriott, Quadrophenia-era Pete Townshend and, of course, the late AC/DC rhythm king, Malcolm Young. It’s a weird caveat for any brand, but then, like Rickenbacker, Gretsch still appears sealed inside certain genres like a fly in amber.

While Gretsch has embraced its 50s rock ’n’ roll and 60s Beatlemania heritage, it has produced many models that distil classic features into more modern packages. Stuff like the Power Jets, and the recent hardtail BT variants, look like something Beatle George might have picked up in early 60s Hamburg yet have enough grunt to satisfy the rock and metal crowd.

The latest poster child for the ‘Gretsch is for everyone, not just for rockabillies’ campaign is the affordable Chinese-built G5655TG Electromatic Center Block Jr. Your blueprint wolf in a zoot suit.

The new guitar’s spec sheet opens in classic fashion with a body pressed from sheets of laminated maple. Those fluent in the language of Gretsch will also recognise the iconic metal G-Arrow control knobs, licensed Bigsby B70 True Vibrato, and the ‘Neo-Classic’ thumbnail fingerboard inlays, the latter first seen on the 1958 G6120 and Duo Jet models. Other familiar features include the set maple neck, 625mm (24.6-inch) scale length, master volume control, not to mention that beautiful Orange Stain finish and gold scratchplate.

Ironically, the big news here is the G5655TG’s diminutive dimensions. It might look like your classic G6120, at first glance at least, but this ‘Junior’ guitar handles more like a Duo Jet. In fact, the G5655TG comes in at less than half the depth of a typical Gretsch hollowbody. It’s not fully hollow, either. As a member of the brand’s Center Block gang, this little guy has a chunk of spruce running up its middle, deftly chambered to provide some weight relief.

In other timber-related news, the fingerboard looks like rosewood. It isn’t. The G5655TG’s 22-fret 305mm (12-inch) radius digit interface is actually hewn from a slice of laurel. You’ll be seeing a lot more of this timber in the sub-£1,000 guitar sector, especially at a time when rosewood is enjoying a much-needed rest.

Unless you’re married to your 50s baseball bats or 80s shred-friendly lollipop sticks, the G5655TG’s slim C neck profile should greet most of you as an old friend. Plus, in a pun you must have feared was coming merely one paragraph ago, the laurel wood fingerboard feels, well, hardy. There’s an agreeable percussive feel to this lesser- spotted timber.

We haven’t mentioned the pickups yet. The G5655TG comes loaded with a pair of Broad’Tron humbuckers. Wired to a dedicated volume control apiece, a master tone, and the famous Gretsch master volume, these pups are not designed to make you sound just like Eddie Cochran. The Broad’Tron has more of a fat modern tone with an output that overdrive and distortion circuits will love to gobble up.

You still get some trademark Gretsch twang in tandem with a sopping wet reverb. Crank up the filth on the bridge unit, however, and a punchy modern rock tone reveals itself. That definition is maintained even when you dial down the master volume control thanks to a treble bleed function.

The middle position adds some warmth, as you would expect. This, and the neck position, are where you want to be for blues and jazz stuff. The tonal palette is gravy rich, but there’s still bags of definition, no doubt fuelled by the spruce-core laminated maple body. That robust foundation also allows you to go high-gain without incurring the wrath of the feedback demon. Who knows, extreme metal with a Bigsby whammy might just catch on...

Couple of things. The G5655TG is proof that Gretsch absolutely owns build and finish quality in the sub-grand guitar market. This thing is flawless. In fact, we’ll go as far as saying it’s getting tougher to distinguish the Electromatic stuff from the Japanese Professional Series models.

Also, yes, this is a Gretsch for just about everyone. If you’re onboard with the retro looks, then we reckon you’ll get the tone you want from the Broad’Tron pickups.

To sum up, then. You get killer playability and tone in a scaled-down affordable package with lashings of eye-popping Gretsch curb appeal. What’s not to love? There’s every chance our little orange crush could be your next big squeeze.