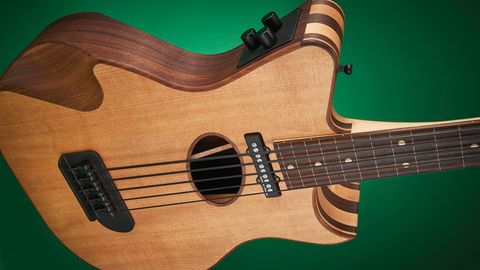 If you’re after an expensive, highly individual bass, do investigate Gillett.

We’re lucky, as bass players, to have a wide range of gear available to us.

Guitarists are less fortunate, faced as they are with an endless spectrum of Fender and Gibson clones, while drummers and keyboard players... well, how much variation do they have?

What is more, we bassists are generally prepared to take chances. We think outside the box. Perhaps by virtue of our instrument’s home territory  at the bottom of the audible frequency range, we feel that we can go wherever we want. Whatever the opposite of conservative is, we’re it.

All that not withstanding, there’s a point where innovation and commercial potential diverge, and it’s hard to sell bass guitars if they deviate too far from the norm, no matter how open-minded we bassists are as a species.

The Somerset-based luthier Michael Gillett is presumably aware of this, with his range of sleek but unusual electro-acoustic basses. With a unique body shape - itself an achievement in this oversaturated industry - and a price tag that will make anyone’s bank manager shiver, the Contour five-string Michael has sent us for review is likely to divide opinions. Well, here’s an opinion of our own.

For the best part of three grand, you’d expect exquisite production and precision engineering at every single construction point, and we’re pleased to say that as far as we can detect, the Contour is flawless.

It has to be: just look at that body shape, the core of its appeal. How you flow wood into that shape as if it were wax is beyond us, having only got a C at Woodwork O Level. At first glance, you’d be forgiven for finding the Contour a bit weird.

Look at that headstock, for starters. Once you sit down and tune up, however, the angles of the machine heads make perfect sense. Then there’s the neck, a 19-fret job with black Rotosound flatwounds that feel and look demonic to anyone used to the usual cheerful silver clangers. Nineteen frets? Black strings? W, and indeed, TF?

Look deeper and the inventory of features continues: there’s a J-style pickup made by Seymour Duncan, an under-bridge pickup by Schatten which you can’t see because it’s hidden, three strap buttons (nice touch) and a rear panel which comes off if you need to change the battery for the active electronics. You’ll catch a peek of the through-body stringing here too, and if you need to tweak the truss rod, head north to the headstock hatch. The whole instrument is a lesson in high-quality construction.

Unplugged, the Contour delivers a wholly decent tone with a reasonable amount of volume, thanks to that large body. You’re paying a lot for the electronics, though, so plug in and let’s see what the instrument has for us.

The tone range comes from the J-style neck pickup and the Schatten unit under the bridge, so you’d expect the ends of the frequency spectrum to be well represented - and indeed they are, modulated either by a volume control per pickup or an unusual tone pot, the Contour’s secret weapon.

Set centrally, the tone is flat, a default sound that has plenty of bottom end and a top end that is clean rather than cutting. Dialled to the left, it actively boosts bass and cuts treble; rotated to the right, it does the opposite. The idea is to keep things simple, which does make sense, although if you want (for instance) to boost both the top and bottom ends at the same time, you’ll need to deploy the volume controls, defeating the point somewhat. Master this system, though, and you’re onto a winner: there’s a huge amount of top end if you wish.

As for playability, whether or not you’ll enjoy playing the Contour is entirely down to your tolerance for large chunks of wood. There’s a Slimline version of this bass available if you find the body depth too much: in any case, the ingenious chamfering of the body has to be experienced to be believed. The ‘Wrist Valley’ at the top is a stroke of genius: it’ll really help the skin of your forearm or wrist from being rubbed painfully raw by the edge of the body.

But look, there’s no getting away from the fact that this instrument is heavy and impossible to fling around the stage the way you would a standard electric. Gillett has clearly put a lot of thought into circumventing this issue, utilising a super-friendly 31.5” scale and a neck width that moves from 2” at the nut to 2 5/8” at the octave. The flatwounds may or may not be to your taste: we can’t look at them without thinking of liquorice, personally. Be prepared for a bit of work if you go for this instrument.

We stroked our collective beards rather a lot when it came to drawing conclusions about this bass. It’s clearly a beautifully-made, carefully-designed instrument, and in use it delivers a performance appropriate for its pricetag.

On the other hand, players with less exotic tastes and less well-lined wallets may well dismiss it as an interesting curio - a way to deploy wood design in a clever way, but not in a manner persuasive enough to deter them from their favourite P or J. If the Gillett brand is to make a serious impact, the company will have to face down a lot of scepticism in the battle to gain bassists’ attention - a battle which it deserves to win.