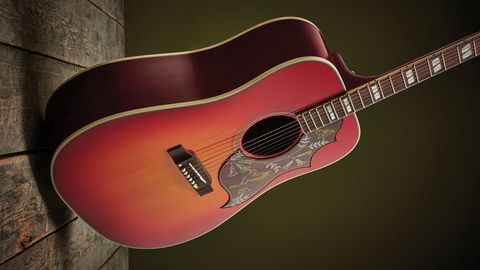 Gibson has boatloads of expertise built into a stalwart of the guitar world to breathe fresh life into the Hummingbird.

Don’t get us wrong, we’ve never doubted his ability to write a song, but we’ve never identified with Chris De Burgh.

To this writer, he is the Chris Martin of the 1970s and 1980s. We can’t remember him ever doing anything bad, and we even went on his Wikipedia page looking for the ‘Controversies’ section that most musicians have, yet nothing. He is into alternative therapies and spiritual healing, his songs are generic and bland, but he still manages to capture an audience and get thousands to sing along with him for the biggest hits - and for that, we begrudgingly respect the ‘Lady in Red’ singer.

And we have never identified with him more than when we opened the case to Gibson’s 2018 acoustic Montana Hummingbird, as the Vintage Cherry Sunburst highlights caught our eyes. We’re more of a natural wood, or, at a push, a blonde-top kind of player, but with some brands you make an exception.

The mahogany merlot one-piece back is bound to the matching sides by an ivory-coloured multi-ply top-and-back trim. On its bottom is a strap lock-cum-jack plug, and at the top, the shoulders are squared off to complete the popular shape.

The outside-edge red on the Sitka spruce top fades into a sunburst centre, which is adorned with a beautifully-shaped tortoise shell scratchplate. Gibson has pulled out extra stops and the plate features a painted scene of a hummingbird and butterfly pollinating flowers - sadly, we’re no horticulturists so cannot go into much more detail about what the flowers are. The traditional double ring rosette around the soundhole is a nice touch, matched by a typical Tusq saddle bridge made of rosewood.

The neck is attached to the body via a compound dovetail at the 14th fret, where a secondary strap lock is attached - a preference of mine rather than tying the strap at the headstock, as it gives much greater freedom of movement and better control of the fretboard. It is made of mahogany that tapers slightly toward the head. Supporting it is a single action truss rod, and on top sits a rosewood fretboard nearly 25” in length.

The mother-of-pearl parallelograms indicating neck positions are nicely crafted to match the space between the respective nickel alloy frets, which are matched by dots on the side of the neck. There are also fret markers on the first fret - unnecessary, but, each to their own.

Neatly slotted in place between the fretboard and the headstock is a Tusq nut just 1.725” wide. Stretched over the top of it to a 17-degree angle are six Light Gauge Gibson strings that reach toward Grover Rotomatic tuning keys. Inlaid into the traditional CF-100 head shape is the classic mother-of-pearl Gibson logo and a crown.

From top to bottom, this Hummingbird creates a buzz. Whatever your preference in size, colour, tone and playing style, it’s difficult to avoid picking this Cherry Sunburst up.

If you’ve had the pleasure of seeing the Rolling Stones play ‘You Can’t Always Get What You Want’ live, typically Mick Jagger strolls out to the front while the choir is singing, and begins to strum a Hummingbird.

So, regardless of what we say or hear from it, there is no doubting the chops this guitar has amassed. Many other members of the Stones are Gibson advocates, and the likes of Brian May, Chris Cornell and Thom Yorke have opted for the same model in recent years.

But with the guitar’s roots in rhythm and blues, Eric Clapton’s ‘Hey Hey’ seemed an appropriate tune to learn. Clapton tended to play his acoustic sets with a Martin, but he toyed with electric Gibsons through amplifiers, so it didn’t seem like heresy to play his tunes on a Gibson acoustic model - and the Hummingbird was more than up to the task.

The song is a healthy mix of flatpicked lead lines and resonant chordal notes, and neither overpowered the other. Each was rich and offered a deep tone to whatever combination you wanted.

Sadly, that meant you could clearly hear it when you hit duff notes, but it’s such a simple guitar to play that it’s rare to ever feel like you’re incapable of striking the right chord - especially on a neck that’s just 12” in radius. With a lead plugged into the bottom and hooking up with a mini acoustic amp, the Vintage Hummingbird really shone.

The electrical LR Baggs Element VTC on the guitar is so neat, you barely realise it’s there. There is no need for bulky knobs or switches on the outside of the body, as the undersaddle pickup volume and tone controls are discreetly tucked into the edge of the soundhole as you look at someone playing the guitar.

Beyond the hidden aspect of them - you’ll just think they are a structural element of the guitar from any seat in the audience - they are positioned so you can easily adjust them mid-strum without losing rhythm.

Subtle shifts in dynamic playing are captured well to recreate an unplugged feeling, wherever you’re playing. This is achieved because LR Baggs developed the pickups to depend on string compression, so essentially it mimics the soundboard’s movement as you play.

The setup is unlike many we have seen and produces one of the best sounds we’ve heard from an electric acoustic. Throw in the pleasure of playing such a superb guitar and it’s tough to say anything bad about the Gibson Heritage Hummingbird Cherry Sunburst.

While it may not be our cup of tea to look at initially, as we were packing the guitar away into its hardshell case with a blue fabric interior, we were reluctant to send it back to Bozeman, Montana, USA - it never looked so lovely.

Maybe Chris de Burgh was right. This lady in red was dancing with me, and even in a mag where some of my fellow reviewers are testing some of Gibson’s other world-beating guitars, if they gave me half a chance, we’d still pick this one, Cherry Sunburst and all.