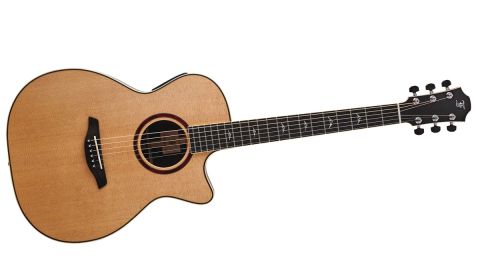 There has been a buzz on the acoustic players’ jungle telegraph for years about Furch instruments and it’s thoroughly well deserved.

The Furch story starts back in the 70s when Frantisek Furch began making instruments in what was then socialist Czechoslovakia.

In those days it was difficult to find good guitars, banjos and so on in the country and anybody setting up a building service was taking a risk as such things had been forbidden under the former communist regime. Imports were prohibitively expensive and so Frantisek - a metalworker by trade and keen musician by night - began to build instruments in his garage and word about their quality soon spread among his colleagues.

Fast forward to 1989 and the final collapse of communism in Czechoslovakia and Frantisek, free from the former political restrictions, opens his first factory. By that time his reputation as a first-class guitar builder had grown, although initially his instruments were available only to the home market. Over the ensuing years the company grew in size and today occupies a 16th-century mill complex in Velké Neˇ mcˇ ice in the Czech Republic, employing 60 skilled workers, producing a wide range of acoustic guitars.

The guitar we have in for review is from the MC - which stands for Master’s Choice – range. Furch tells us that the guitar offers a “perfectly balanced sound”. It benefits from solid woods and price wise the Orange OMC-SR (OM Cutaway, Spruce, Rosewood) is just north of £2.5k.

If a duet of cedar and mahogany is one staple of the acoustic guitar top-and-back world, then spruce and rosewood is almost certainly the other. The AAA Sitka top looks superb and Furch has sensibly employed a transparent pickguard so that the timber’s good looks aren’t interrupted in any way. The Indian rosewood is that thick chocolate colour, with a strikingly straight grain, top and back, offset with flamed maple binding. Visually, it’s a stunner. The OMC-SR shares the theme of neck and fingerboard materials with its companion, but the tuners here are Schaller M6 with a ratio of 1:18 to ensure a greater level of tuning accuracy. Apart from that, the rosette is a ring of padauk and the fretboard inlays are a bit more on the flamboyant side. The only thing that remains is to hear what both these guitars sound like.

The trebles have that glassy sheen to them and the sustain on the notes sounds like it’s being processed through a classy reverb unit. Despite the thinner body depth, which maxes out at 102mm (four inches) as opposed to the recently reviewed Blue’s 114mm (4.48 inches), the basses are superbly controlled with enough snap and punch to satisfy strummers and pickers alike.

The OMC has the upmarket LR Baggs Anthem system onboard. Both have side-mounted preamp/tuner combos. Once again, you can opt for soundhole controls if you’re making a Rainbow order, but the side-mounted variation offers more EQ options. The OMC’s Anthem, benefitting from the integral microphone and the facility to balance piezo with mic via the preamp, has an even more sumptuous array of plugged-in sounds. We could probably have fiddled for days and not actually come across a sound we didn’t like.

There has been a buzz on the acoustic players’ jungle telegraph for years about Furch instruments and it’s thoroughly well deserved. Build quality is excellent and the facility to customise an instrument to your own taste is an additional bonus. If you’re not already familiar with Furch acoustics, we would encourage you to seek them out.