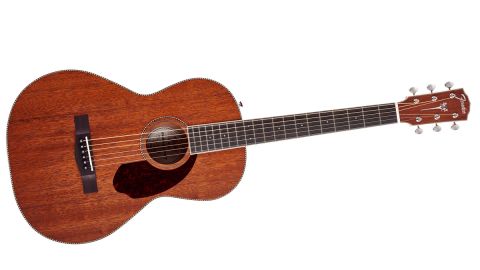 The PM-2 makes a strong statement: Fender is serious about acoustics and it’s reaping rewards for us players.

The mahogany tops have an indented texture to the grain that looks and feels vintage; a thin ‘open-pore’ satin finish leaves their organic looks unhindered. While we’re encountering more guitars in this price territory that aim for vintage Americana-style heritage, these models set a new standard for their price range.

This is a lightweight guitar, too, especially for solid back and sides builds. The PM-2 is actually neck-heavy when standing with it on the strap. For the heavy-handed among us, that might give pause for thought, but the weights feel welcoming and accessible here, with the satin ‘open pore’ necks soon beckoning. And in play, there’s the sense that it all adds to the appealing sonic qualities of this guitar.

Fender’s specs say otherwise, but the PM-2 parlor’s neck feels meatier when compared to the recently-released PM-1 and PM-3 from this range, especially in comparison to its slimmer body, and there’s more of a medium-low action here compared with the low on the other models. Off-putting for some, but it could also be a key factor towards this being the biggest surprise of the trio. It certainly makes its extra 2mm depth over the PM-3C count. We’re used to the descriptions ‘boxy’ and ‘compression’ being par for the parlor experience, but the PM-2 projects the latter trait wider than expected with more lower-end clout than you might assume from looks alone. The solid construction surely helps and the PM-2 soon reveals a versatility that could appeal to those who may not have considered a small-body model before.

Again, that rounded woodiness pervades picked notes, but it really opens up for harder strumming – richer and more powerful in the bottom end where it might be expected to be predominantly mid-focused.

We would’ve liked to see the Paramount preamp offered, at least as an option - widening the potential appeal this design deserves - but as it stands, this is a solid-wood acoustic with a quality hard case. A compelling sell.