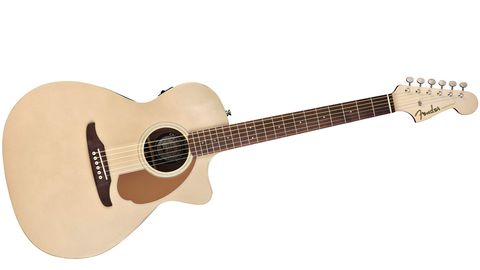 A contemporary electro in looks, sound and playability.

With fundamental design traits that have proved to be incredibly successful since the 1930s, is it any wonder that the word traditional is so closely associated with acoustic guitars?

And if it ain’t broke… but as brands seek to attract new players to their wares, sometimes they need to offer something fresh.  Fender is certainly doing that with the look of its new California series.

Three new shapes are on offer with three different spec option levels in an array of atypical acoustic colours (and not a natural finish in sight) giving a distinctly different slant on everything that’s gone on before.

This Newporter is the mid-size body in the series, an auditorium with a shallower body than a dreadnought. That could well prove more tactile for those switching from electric. The Player edition represents what is by far the most affordable option of the three on offer, with the Classic and Special retailing at more than twice its price on the street - one fundamental difference being the back and sides here are laminate.

Our Champagne finish is certainly a different kind of statement for an acoustic, and a little more classic than some of the more vibrant blue and red hues offered elsewhere in the range. It’s disappointing to see some small flaws and runs where the finish has been applied on the top on our test model, though, and not something we’re used to from Fender.

But most eyes will be drawn straight to the neck, and it’s an interesting talking point. A six-a-side headstock on an acoustic?! What a time to be alive! Fender has done this before, of course, and it might be a turn-off for some, but for this series it makes sense visually as well as when you get to grips with the modern mahogany C-shape neck.

It’s a slim taper and it won’t feel unfamiliar to Fender electric players. This is a mid-voiced guitar for an all-rounder shape. The lows aren’t deep but it’s a bright and lively tonality. And, unlike the lower-key Fishman Sonitone system we see on a lot of acoustics, the company’s preamp here has controls mounted outside the body with a handy bass knob to boost the bottom-end that’s effective in practice, though you’ll need a preamp pedal or acoustic amp to coax more earthy tones from this piezo.

The price point is key here, because it makes the Newporter a viable option for live electric players looking for something to play a few acoustic numbers or even acoustic sets with, or indeed anyone else searching for something a bit different to start learning. And for that it’s a welcome addition to the acoustic guitar’s story.