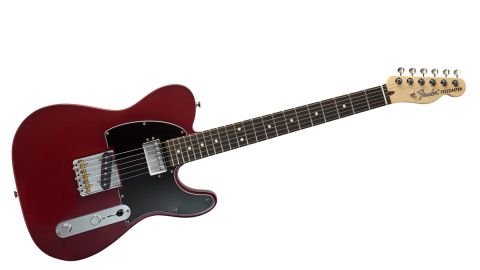 There’s little here to disappoint thanks to some nice upgrades and a welcome price tag.

Another year and another refreshed range of classic designs from Fender.

Last year we had the American Originals (and the Mexican-made Player Series), while 2017 introduced the more contemporary American Professionals. On to 2019, then, and we have the American Performer Series, which replaces and expands upon the previous ‘gateway’ American Specials. Along with the usual suspects, we get some neat additions, such as the Mustang guitar and bass - the first US-made Mustangs since anyone can remember - along with a Jazzmaster that drops in a Strat’s vibrato, and the cool, if oddly named, Telecaster Hum: a neck-humbucking version of the standard Performer Telecaster.

Like Fender’s Specials that came before them, the Performers come in gigbags, rather than hard cases. The maple necks with either maple or rosewood fingerboards and alder-only bodies are made in Corona, but many of the parts - including the Strats’ vibratos - are Asian, just like the outgoing American Specials, for example. Like the previous Specials, the Performers also stick with the ‘Modern C’ neck profile along with jumbo frets. The bodies here are finished in gloss polyurethane (with a smattering of satin options), while the necks, including the headstock faces, are all satin polyurethane. A simple identifier of the new models is the silver-coloured 70s-era Fender headstock logo; the Specials had a black logo.

So, what’s new? Quite a bit, such as ClassicGear tuners that combine a mainly Kluson-like vintage-style with split head posts (all the same height) but no rear-placed screws. They attach in modern style with a nut and washer and offer an improved, greater fine-tuning 18:1 gear ratio and will also be available as spares.

Then there are the pickups, designed by Tim Shaw. The Performers swap the American Special’s Atomic humbucker and Texas Special single coils for new Yosemite single coils and DoubleTap humbuckers. The Greasebucket tone controls are kept from the American Specials, but are used only on the bridge pickup of the Strats and as a master tone on the Teles. Many of the Performers also have expanded switching.

It might be oddly named, but the Telecaster Hum takes the standard Performer Tele and replaces its neck single coil with a covered DoubleTap humbucker. The bridge Yosemite uses Alnico 4 rod magnets (the single-coil neck pickup of the standard Tele uses Alnico 5) and, as we said, is wax potted. There are no extras in terms of switching here, but, again, we have a humbucker/ single coil pull-switch on the tone control.

Colour choices? Three-Colour Sunburst or Vintage White with maple; Aubergine (shown) and Satin Surf Green with rosewood. There are no ash bodies offered in the Performer range, but both the maple- and rosewood-’board Tele Hum we had to test were well weighted, just like the Strats. And, just like those Strats, the necks feel perfectly good, even though the untinted maple neck/fingerboard here looks typically anaemic. Both are also what the Custom Shop would call ‘rift-sawn’, but there’s no figure or flame here. The rosewood on our other sample looks rather low grade with a dulled, flat brown colour and no visible striping, and that curved line of the fingerboard end behind the nut looks rather scruffy if we’re being picky.

You also might cast an eye on the corners of the walled bridge and think they’ve been chewed, but comparing the bridge with our ’69 original, it actually looks identical. The three brass saddles might not please any Auto-Tune users out there with their intonation compromise, but anyone who loves the brutal simplicity of the Tele won’t be bothered at all.

Plonking a humbucker on a Tele can be a tricky task. Like the recently-reviewed HSS Strat, we have quite a wide contrast between the bridge single coil and the neck humbucker. If you’re vamping on the neck, for example, and then switch to the bridge, the thinner, brighter, steelier voice can be a bit of a shock. Turn the tables and that neck pickup can sound too big and thick and, in comparison, lack some clarity. There’s certainly a snappier voice to the humbucker when you compare it with the American Professional ShawBucker Tele, but less ‘thick cream’ compared with a single-cut, even with low-output Seymour Duncan Seth Lovers.

In single-coil mode, the neck humbucker drops us back into more traditional Tele territory, albeit cleaner without the slightly rounder nose to the note that a more typical covered Tele neck pickup brings. Listening to our other Tele Hum with its rosewood fingerboard seems to slightly beef up the midrange, while retaining clarity but with less of the snappy spike we hear here from our maple ’board example.

Any new mainstream guitar launch - not least one by the big guns - gets many a player hot under the collar, and the American Performers will have garnered plenty of forum inches by the time you read this. At pretty much the same price (full retail) as the departing American Specials, these American Performers seem fairly priced with their numerous upgrades and there’s little to disappoint. Additional features such as the ClassicGear tuners are excellent additions, but it’s the new pickups that we suspect might be the main discussion points.

The problem here, of course, is that we all have a different idea of a ‘great’ Tele sound and one pickup or set simply won’t suit every player out there. Balancing humbuckers with single coils is never an easy task and on the Telecaster Hum you should be prepared to use the volume and tone controls - again, setting up specific patches on your Helix and the like maximises the potential and recording with these is a breeze.