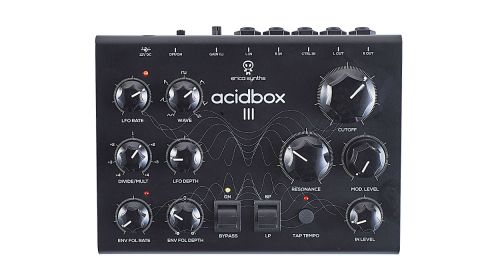 A characterful, gritty analogue effect, made all the more flexible by its stereo signal path and modulation options.

Latvian outfit Erica has been steadily making waves in recent years with its propensity for creating unusual Eurorack modules and desktop devices, its enthusiastic embrace of the DIY scene and its love of Soviet-era electronics.

That has included a number of releases based on the Polivoks - a classic duophonic Russian synth and possibly the best-known electronic instrument from the Soviet era. So far, Erica has resurrected various elements in the Polivoks in DIY module from, as well as creating a desktop unit based on its sort-after VCF design, the Acidbox, the third iteration of which we have on test here.

So what’s the Acidbox got onboard? The main event is obviously the filter itself, which emulates the key characteristics of the Polivoks original. This means we get two modes: a 12dB low-pass and a 6dB band-pass. The Polivoks VCF is known for its grittiness and its aggressive resonance, and true to form we get a resonance control here that can be seriously harsh at extreme settings. It keeps that harsh edge right down into the low frequencies too, meaning the Acidbox can turn even tame sources into seriously powerful bass - be careful of your speakers!

The major change from previous versions is that the Acidbox III features a stereo signal path. This means we get a pair of input jacks for the left and right channels, and a pair of balanced jack outputs. Mono sources can be fed into just the left input and split across both stereo channels. Interestingly, the Acidbox seems to apply a slight widening effect to signals, pushing some mono information out to the sides. This is certainly not an undesirable effect, and has the bonus of being able to add a touch of extra presence to mono sounds.

To add movement to the filter, the Acidbox features an LFO and envelope follower. The LFO has a continuous rotary for adjusting the waveshape, from a simple sine through bi-directional saw waves, square, envelope-like waveshapes and finally a sample-and- hold mode. This is joined by Rate and Divide/Multiply rotaries, the latter of which is great for using the LFO synced to a rhythmic audio source. The envelope follower, meanwhile, has just a single rate control for adjusting the decay time. Both feature their own Depth rotaries for adjusting the level of modulation. There’s also a global Mod Level rotary though, which is a handy tool for punching in modulation in a performance setting without affecting the pre-assigned LFO/env balance. The LFO rate can be set with a tap tempo button.

In addition to this, the Acidbox has a rear-panel control input jack, which can receive a variety of input signals (controlled by turning screws on the unit’s underside). This can accept a footswitch (controlling the tap tempo or bypass), an expression pedal for tweaking cutoff frequency, a gate/trig input for syncing the LFO, or a CV input for cutoff modulation. Since the input is stereo, it can - in some cases - control two aspects of the Acidbox through one cable, eg, simultaneous CV cutoff modulation and LFO sync.

The are two level controls on the Acidbox III - a back panel gain, which can apply +20dB of signal boost, although only to the left (mono) input, and a front panel input level. This front panel control is actually more of an overdrive - even at low levels it adds audible distortion to the signal. It’s a gorgeous, raw-sounding effect, and one that particularly suits the gritty nature of the filter. This grittiness is what the Acidbox really excels at.

As its name suggest, the Acidbox is great for imparting squealing resonant sweeps and meaty low-end boosts, but its usefulness goes beyond beefing-up basslines. Erica provide some good example settings in the manual to show off what it can do. In synth follower mode, the Acidbox can make even the thinnest of instrument sources sound like a gritty ’70s analogue system. Drum follower is similarly good for adding weight to lifeless beats. Crank up the resonance and modulation and the Acidbox becomes a sound source in its own right, capable of sci-fi effects and looping modulated weirdness.

Even with the overdrive and resonance turned down, it still tends to impart a hint of crunch - if you want clean filtering, this isn’t the way to go. To be honest, if you’re after clean and precise filtering, you probably want to turn to a plugin anyway; if you’re interested in a hardware filter, then it’s probably safe to assume you want something that’s going to impart character on the sounds you feed through it, and on that front the Acidbox is excellent.

In all honesty, this reviewier is probably not the best person to comment on how authentically the Acidbox emulates its inspiration - my Polivoks experience is limited to encountering them in other people’s studios - but to my ear it capture what I expect from a Polivoks filter.

It’s not the cheapest effect of its kind - version III comes in at nearly twice the price of version II, but given the stereo signal path, this doesn’t seem unreasonable. It also would have been nice to have a MIDI input for syncing the LFO, freeing up the control input for other duties when using the pedal in the studio or on stage. Some control over the output level would be handy too, given how lively the Acidbox can get when you drive its inputs and crank the resonance. These minor quibbles aside though, this is a really nice, characterful analogue effect. Particularly for producers working in the grittier ends of techno, lo-fi, drone and other experimental or heavier genres, this is the sort of effect you could see yourself falling in love with and running pretty much everything through.