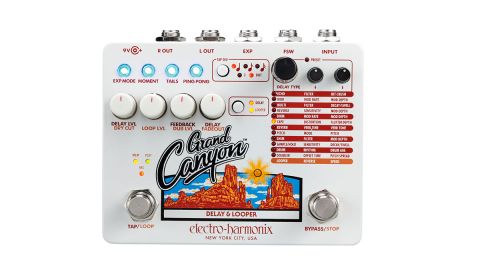 This is a very practical delay and looper; the £100 more than the basic Canyon is money well spent, unless you must have something with a smaller footprint.

The EHX Canyon found popularity among guitarists by cramming several delay types and a looper into a very compact pedal.

Now the company has built on that with a larger pedal, extending the feature set, named (somewhat inevitably) the Grand Canyon. This deluxe version adds more delay types and a second footswitch dedicated to tap tempo and loop functions, plus stereo output jacks (the input is still mono) for an expression pedal/external footswitch, and the ability to store 13 presets.

Although it has much more front-panel functionality, the Grand still manages to exist in a pretty compact form, taking up about the same space as three micro pedals side by side. The only downside is that the legending denoting the various delay types and their specific adjustable parameters is a bit on the small side. The pedal has three modes: Delay, Looper and Looper and Delay together where you can have a selected delay effect on your looped sound. The cream- coloured knobs access standard Delay Time (also set via Tap Tempo with nine divisions), Feedback and Level, but offer a different set of parameters in Loop mode. The looper, and each of the 12 delay types, also has two unique instantly adjustable parameters. A black rotary knob scrolls through the list below it loading delays or presets, a press on the knob putting the pedal in Preset mode. You can store one preset for each delay type (and the looper), each preset encompassing all the parameters set by knobs and switches.

Four buttons illuminate when active for practical performance tweaks. These are things that more often than not are hidden in menus, so the instant access is very welcome. One offers ping-pong delay at the stereo output, one turns on the Tails mode whereby the repeats dissipate naturally after bypass rather than being cut stone-dead, another offers momentary action for the bypass footswitch to add or cut delays at will, while the last switches modes for any connected expression pedal between use as a volume control placed before the pedal for swelling delays or to control a mix of assigned parameters.

With many taken from the Canyon, the delay types cover a host of eventualities including an accurate Deluxe Memory Man emulation (DMM), Reverse and Shimmer, but there are some notable additions. Drum delay is based on the Binson Echorec, a Gilmour favourite and a vintage alternative to tape echoes that used a magnetic drum rather than tape to create its repeats. Here the parameter knobs select various combinations of the four virtual playback heads for patterned echoes and dial in signal degradation.

Where the Canyon had pitches shifted by an octave, the Grand offers a Pitch Delay with many more selectable intervals. By default, the pitch-shift is outside the delay’s feedback loop for single pitch repeats, but there’s the option of placing it within it for a cascade of pitch-shifting repeats. Also new is a Doubler with combined detune and delay, which is great for thickening up your signal.

Looping fans will be pleased with the full 16 minutes of recording time available. Operation is pretty straightforward using the two footswitches, but an external footswitch does offer more practicalities, and adjustable parameters (such as Dub Level and Loop Fadeout time) deliver useful flexibility.

Us guitarists often favour delay in many different varieties and this pedal fits the bill with nice-sounding delays that work in a musical context. They may not all get regular use, but it’s good to have them in your locker. Having programmable presets, though, is what gives the pedal a nice edge.

The combination of all the options plus some very small parameter knobs does not make for easy tweaking on a dimly lit stage, so having your own working preset with stored knob values for each delay type for instant recall is the way to go for changes between songs, utilising the invaluable tap tempo for a quick setup or sync’ing to tempo while playing.

This is a very practical delay and looper; the £100 more than the basic Canyon is money well spent, unless you must have something with a smaller footprint.