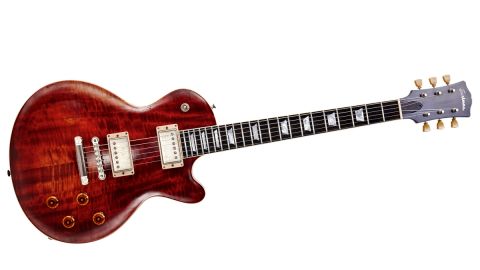 Little did Gibson know back in the early 50s that its first solidbody guitar would spawn a whole industry.

For many of us, the Les Paul started in 1958 and was over by the time the restyled ‘SG’ replaced it in 1961. These so-called ’Bursts have fuelled dreams and obsessions, and a considerable number of copies, clones, forgeries and fakes.

But we still can’t get enough, can we? The other side of the single-cut coin is the numerous makers who have taken Gibson’s blueprint and added their own twists, quite often simply to side-step Gibson’s legal department.

Nonetheless, from the early 50s the influence of the Les Paul began to leave its mark even if, as with Guild’s M-75, many borrowed the style but made it hollow or semi-hollow.

In more contemporary times, like the Stratocaster, the Les Paul has been the inspiration for many an electric from PRS’s Singlecut, to Patrick James Eggle’s Macon Single Cut… and many more.

Eastman SB59/v Eastman’s first solidbody falls into the former ‘vintage’ category, but our sample - a pre-production prototype of this new design - looks altogether more hand-fashioned than a late 50s ’Burst. In fact, if we didn’t know better, we might think that ‘Eastman’ was a solo maker working back in the 70s hand-making electric guitars in a garden shed.

As we noticed when we first looked at these Chinese-made ‘antique’ constructs, when you open the case you do a double-take: is this really a new guitar? It’s obviously a close cousin of the classic Les Paul with virtually zero nods to modernism.

Shape-wise, it’s slightly fuller in the lower bouts than a Les Paul, but it’s the rounded horn - reminiscent of Gibson’s Les Paul Personal - that immediately provides visual difference. It’s certainly made of the right stuff: the mahogany back is one piece, the top centre-joined with a far-from-classic tiger striped maple top but with a nicely deep, violin-like dishing.

The neck, with single-action truss rod, is one piece (there are no headstock-widening wings), while the classic LP ‘crown’ inlays are referred to as ‘Ocean’ pearl and provide the only bling with a subtle sparkle against the bound ebony ’board.

The 15.5mm-thick headstock has a matching ebony facing (and truss rod cover) and pearl inlaid logo, and a very Gibson-like top lip along with a steep back angle. The neck-to-body angle is steep, too, meaning that the tune-o-matic seemingly sits quite high off the body.

Unlike many modern single-cuts, it’s not chambered, nor weight-relived, and achieves a pretty good if substantial-feeling weight of 8.7lbs. But it’s the finish, an antiqued ‘French polish’, that’ll be hugely polarising. It comes from Eastman’s extensive experience in orchestral stringed instruments and is applied by hand.

French polish is actually the process, not the material, though it’s typically a shellac dissolved in alcohol. It’s a fairly lengthy process and is nowhere near as hard as a nitrocellulose or the more commonly used polyurethane, polyester or acrylic. It marks easily, but is repairable and lets the wood breathe.

Aside from its visual impact, the impression of that old-school hand-build is enhanced by quite a textured feel to the neck back, for example.

Hardware, too, is aged – the stud tailpiece sitting a little closer than most to the tune-o-matic bridge. There are no tricks in the choice of Seymour Duncan Antiquity humbuckers in their aged nickel covers and the classic two-volume/two-tone control setup with a shoulder-mounted three-way toggle, all placed in unshielded cavities.

The Eastman’s frets are slightly chunky and strapped on, the Eastman feels heavier and like home.

As ever, we use various references and the Eastman is the most ‘polite’ we have to hand, lacking the clarity of more modern-style builds, not least a 2017 Gibson LP Standard T, a PRS McCarty or Singlecut, and a Godin.

It’s also the lowest in output and setting up a range of sounds from pretty clean, boosted clean, Marshall crunch and boosted, that theme is continued. The Antiquities aren’t potted either, which can be an issue for some players at higher gains/volumes, of course. Few surprises, but with a recipe this good that’s certainly well replicated here, who cares?

We’re tempted to conclude that the Eastman is for the player in touch with his or her vintage side, but we’re less sure that, in reality, that’s the case from what we’re hearing rather than what we’re seeing or feeling. That said, it’s a guitar we seem to just want to plug directly in and channel our inner Kossoff.

This is a single-cut that nicely illustrates the options we have in the current market. Eastman’s vision looks and feels like a custom-made instrument; it closely follows Gibson’s blueprint with a slightly altered shape. It’s these combined factors that makes it hugely valid and, as we’ve said, the same guitar is available with a gloss nitro finish, Duncan ’59s and unaged hardware if you’d prefer - at an even lower cost.

And the Eastman in its antique finish? Some have questioned the validity of a £1.7k Chinese-made guitar. But we’d suggest you let the guitar do the talking.