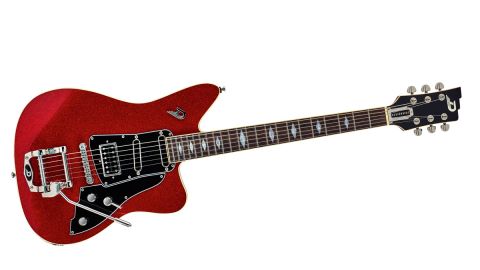 Duesenberg has done everything possible to make this guitar as irresistible as possible.

What you probably already know about German brand Duesenberg: it is named after Depression-era American super cars that made a Rolls Royce look like a Fiat Panda; its guitars look the absolute business; and Tom Petty and The Heartbreakers guitarist Mike Campbell, occasional Eagle Joe Walsh and Keef ’s adopted son Johnny Depp all have signature models.

What you need to know is the new solidbody Paloma model has been added to the bulging Duesenberg catalogue, loaded with the good looks and high spec we’ve come to expect.

Just look at this guitar. This character is all about offset old- school cool. In fact, if this thing was a member of a hot rod guitar gang, its cohorts would be the likes of the recently reissued Hagström Condor and Guild S200 Thunderbird, maybe a Gretsch Billy-Bo and something from Reverend... and definitely a Fender Jaguar.

The Paloma’s body binding might give the impression that it’s concealing a slab back and a veneer top but it’s actually all alder under the paint. You could get the Paloma in a Nordic Narvik Blue (not a million miles away from a 50s Fender/Cadillac DuPont Daphne Blue) but we reckon our guitar’s Red Sparkle top is way cooler. It looks like the Naugahyde vinyl used to upholster 60s hot rods, and those big padded Kustom amplifiers from the era that were much easier on the eyes than the eardrums.

The 648mm (25.5 inch) one-piece maple neck is glued to the body and comes topped with an Indian rosewood fingerboard that harbours diamond-shaped inlays plus 22 jumbo frets following a 305mm (12 inch) radius. The D profile neck has exactly the same dimensions as the Gran Majesto, and many other Duesenbergs including the Mike Campbell and Johnny Depp signatures. The top nut is perfectly cut and comes slotted for 0.010, 0.013, 0.017, 0.028, 0.042, 0.050 gauges.

Access to the Paloma’s upper frets is made easier with some light sculpting as the body connects to the neck heel. The contouring continues with a cutout on the rear of the body where the timber meets your ribcage, and on the front to accommodate your right forearm, both Strat-style.

The pickups are mounted on a three-ply plastic plate, like an old Burns Hank Marvin, say. You get the well-respected Grand Vintage humbucker in the bridge, the new Pearlito single coil in the middle and the equally new and single coil Alnico-Blade at the neck. Control comes courtesy of master volume, master tone and a four-way rotary pickup selector, all huddled on a separate scratchplate.

Of course, the Paloma also has some Art Deco-inspired shiny nickel bits. The same stepped buttons on its locking tuners are just beautiful. Paired with an anchored tune-o-matic style six-saddle bridge, the short body Diamond Deluxe vibrato is a Bigsby ‘tribute’ with holes instead of pins for quick and easy restringing, and a beautifully over-engineered arm.

Oddly, the vibrato body isn’t screwed flat against the guitar’s top, with little metal spacers creating an angle. It seems likely that this mounting method is employed to reduce the angle of the strings as they pass over the bridge, something that could reduce drag and aid tuning stability.

What you won’t find on this guitar is a country of origin stamp. While the company claims such labelling is not important to them, it does acknowledge that knowing where a guitar is born is a big deal for some, not least the guitar-buying public.

Duesenberg says it relies on its vast experience to source the best parts and materials from around the world, something that’s evident in its products, and that enterprise actually makes it difficult to label its guitars as made in Germany. Does it matter? We’ll leave that decision to you.

Duesenberg guitars are put through a Plek machine to ensure great playability and both these guitars have comfortable actions with no buzzing or string choking. Tuning stability is rock solid too, despite us wanging ourselves senseless during this test.

We’re already familiar with the Paloma’s Grand Vintage humbucker. This pickup is widely used across the Duesenberg stable. Think of it as a PAF with some extra poke. It shimmers on clean settings and maintains its impressive note separation and clarity when you dial in some overdrive. It can handle the heavy stuff but feels most at home with big trashy rock ‘n’ roll riffs, the kind of stuff Johnny Depp appreciates.

There’s not much info on the Paloma’s two new single coils. All we can say is they sound thick and juicy, and just perfect for Jimi-esque riffs, Little Wing chordal stuff and upper ’board noodling. There’s a lot of tonal variety here and we like the balance between all three pickups. Clean or overdriven they make a good team.

The Paloma is a fantastic ambassador for the Duesenberg brand. The attention to detail evident in the hardware alone shows that someone really gave a damn when these things were sketched out on the drawing board. Fit and finish is top notch, playability is flawless, and then there’s the sound these guitars push out.

The Paloma left a big hole in our life when the postie wrestled it back to send it to our photography studio. This thing is a tone beast. It puts out classic single coil tones that rival a 50s three-pickup icon, yet there’s an underlying beefiness in its delivery that gives it a voice of its own.

As to price, well, the world is your bivalve mollusc when you have 2,000 sheets of disposable income straining to be released from your savings account. This guitar faces some major competition from products brandishing stuff like nitrocellulose finishes and ‘Made in USA’ stamps. Our advice is simply to play them. Duesenberg has done everything possible to make this guitar as irresistible as possible.