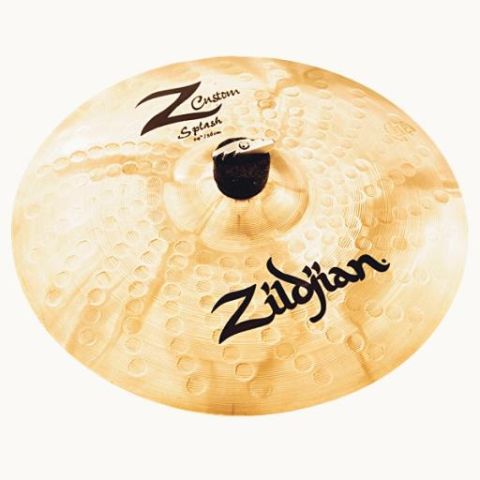 Although heavier than the original A Customs, these medium-weight versions have lost little of the original fast attack and brightness - they are swift but full, and the effect they should have in a band context is of a bright, penetrating, splashy crash, with high volume and projection. The Z Customs live up to the Z Custom credo of "loud, raw and aggressive". We had great fun with the Thrash ride and were bowled over by the Projection crash. In such company the 14" made less of a splash.

The A Customs were originally developed by Zildjian with input from Vinnie Colaiuta to add a bright and modern edge to the classic A Zildjian sound. They were a great success, and Zildjian extended the range with seven more crashes. Described as medium weight, they are in fact the heaviest A Customs so far, which means they are louder and higher pitched than previous models, and are more practical for many hard-hitters of today.

However, there is a potential contradiction here because the original idea for the A Customs was that they were thin cymbals, which harked back to '40s-style A Zildjians. So presumably there's a limit to how heavy Zildjian can make A Customs before they lose their raison d'etre? Luckily, so far as we can judge, this batch doesn't seem to have passed that limit, as they retain a quick response, particularly when they are struck firmly, and unleash plenty of volume with no sign of choking.

The heightened pitch is definitely noticeable and the overall impression is of a bright, glassy crash followed by a smooth, medium length decay.

The smaller cymbals (14" and 15") are quick-responding, and despite the extra weight, the characteristically bright A Custom timbre makes them almost splash-like.

We particularly liked the 16" and 17" crashes, as they retained the speed of response while giving more volume. These are real, full-bodied crashes, but they never lose their clarity. For the crashes above this size, the extra weight starts to make more of an impression.

We found the 18" a little clangy - it seemed to have lost some of the transparency and grace of the 17". I found it to be a similar case for the 19", but this is a relatively big crash, for which you probably leave more space in the music, to allow the full tone to emerge. Despite this filling out, the bigger crashes (19" and 20") still responded nimbly. And the 19" was noticeably faster than the 20", which felt more than a mere inch bigger as it had a surprisingly deeper pitch.

As an added bonus, both the 19" and 20" have big, clean-sounding bells, ideal for riding on. In fact, we thought the 20" made a great all-round ride cymbal as well as a big-hearted crash. Being medium weight it readily falls into that once-popular category of crash-ride.

To sum up, these new A Customs have certain consistencies throughout the range, but they also change in some other characteristics as they increase in size. As a result, make sure you select with care.

Half crash, half gong

Wow! The 20" Z Custom Projection crash is definitely a crash, with a shrill and bright attack, but it's followed by a massive, deep, gong-like whoosh. It is very oriental-sounding with shades of the Rank gong. It certainly takes you by surprise when you first wallop it... a nice surprise though.

So it's half crash, half gong. What this means is that, unlike a real gong where you tend not to hear the attack but just the slow build-up, here you have a quite strident attack, and once it's over you're left with a gong-like humming. The decay, as you can imagine, lasts forever.

This is a crash I should think you'd reserve for a particular place in the music where it can be isolated and fully appreciated for what it is. It sports what is apparently the largest bell of any Zildjian crash, making it Zildjian's loudest crash. Well, we're not going to argue.

The 19" Z Custom Thrash ride is another unusual addition. Described as a thrash ride it has a touch of the dustbin lid sound about it, but not so much as to make it too nasty. Played with the tip of the stick it actually has clear definition, but since it's designated thrash, we guess you're invited to give it some.

Lay in with the shoulder of your stick and it produces a bright and fairly corrosive wash, but every stroke is still heard. It soaks up the onslaught without washing out. It's similar to when you ride a china, but the sound is less abrasive. We would nevertheless suggest you get your ear plugs in if that's the way you intend to play it.

At 19" instead of the usual 20" it is relatively high-pitched for a ride and thus even brighter. It's a contemporary sound and a sure-fire way of stirring up excitement without resorting to the full-on racket of riding your china. The look is distinctive with lines of circular hammerings radiating out from the bell like a fairground wheel.

This, Zildjian tells us, is a hybrid of both A Custom-style and Z Custom-style hammerings. The hammer blows have evidently been made from beneath the cymbal as they stick up on the playing surface, the opposite way around to the hammerings on the Projection crash.

The 14" splash was the least captivating of the Z trio for me. There's nothing wrong with it, but the other two are real characters, and played next to them, it didn't strike us as anything too out of the ordinary. It's designated a splash, but at 14" it could be regarded as a small crash. It's been hammered in the same way as the 20" Custom crash, but is too small to have much of the Oriental flavour about it.

Nonetheless, when it's next to the 14" A Custom Medium crash it was indeed darker and faster, as it was also slightly thinner. It has more of a splashy sound to it, while the 14" A has more spread, body and roundness.