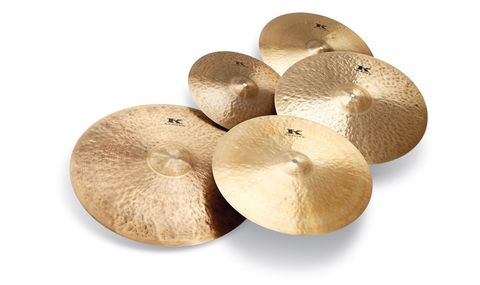 Kerope 'K' Zildjian was patriarch of the historic oldest cymbal family between 1865 and 1905, back in the days when Zildjian was based in Constantinople, present-day Istanbul. Now the modern American Zildjian company acknowledges its forefather in this new set, an updated take on the traditional Turkish-style cymbals produced in the 1950s and 1960s.

This was a transition time between jazz and rock and before the explosion of cymbal designations which delight and confuse today's drumming enthusiast in equal measure. Accordingly this is a compact set - two each of rides, crashes and hats - designed by Zildjian's Sound Lab with input from various drummers, in particular New York cutting edge experimentalist Zach Danziger.

Zildjian's R&D director Paul Francis reveals that the company minutely examined the best vintage cymbals held in its vault in order to replicate the 1950s/'60s designs. They pored over bells, profiles, hammering, lathing, tapers and weights. The goal was "to achieve the old world look and sound sought after by many artists today".

The result is a vintage look with the K Kerope logo and the classic Zildjian Turkish stamp on muted old-gold B20 bronze. The 18" and 19" cymbals and the top (lighter) cymbals of the 14" and 15" hats are subtly hammered with fine lathing which broadens out on the bells. The two rides and the bottom (heavier) hi-hat pairings are more intricate with a slightly darker tinge and heavier hammering.

Cymbals are individually hand-crafted in a 14-step process, resulting in each one being slightly different, as evidenced by the individual gram weight of each cymbal being hand-written under the bell.

Both early Turkish-made Ks and American Avedis Zildjians from the 1950s/1960s have become increasingly sought-out and valuable in recent times. All the cymbal companies have had a go at producing vintage-style lines and these Keropes are probably the closest yet.

They sound right and they feel right. A proprietary patina process even ensures they look aged. The aura is remarkably authentic - thin cymbals flexing with that individual hand-made vibe, desired not only in jazz and session circles, but in any music which aims to capture the organic grooves of timeless jazz, soul and pop.

The series is epitomised by the 20" ride which has all the character we're looking for. The flavour is dark, the stick definition is clean and clickily precise for those jazz 'ten-to-tens', but effortlessly prompting a full deep wash and spread - that oh-so-slightly trashy, breathy 'ttarrhhh' which is the hallmark of a lightweight, heavily hammered ride.

We tried the 20" depping on an Irish gig - tunes ranging from traditional to country-rocking - and it snuck in beautifully. Deep enough to sit under the music, blending in rather than raging over the top. Perfect for small group jazz.

When it comes to the 22", these characteristics are exaggerated, so that you have a titanic spread which could be overwhelming. This one is really dusky and expansive.

The bell is the second test of authenticity and both of the rides pass supremely - sweet and mellow, yet plump and distinct, perfect for those Afro-Cuban 6/8 Blakey and Roach-style Latin-bell grooves. The cymbals repay considerate playing rather than heavy-handed bashing, you'll want to explore the entire surface, luxuriate in the subtle colours.

All this flavour extends to the two nominal crashes - 18" and 19" - which you could just about ride with a deft touch and small beaded stick. The 18" especially blooms quickly and dies suddenly. The 19" has more of a smooth tail-off, with a satisfyingly thin and wobbly edge.

Both pairs of hi-hats complete the theme handsomely. Although the closed sound is velvety, the quality wins through with a thick and compelling presence. But things really come alive as you start to open up the hats for a good sloshing, particularly with the big 15" pair, stoking up a broad and complex drive, getting louder with a fabulous warm and musical tone.

Although dark with a caressing stick feel, we mustn't leave you with the wrong impression. A complete Kerope set also has that edgy, nervy, adventurous, rattling attack - think Elvin Jones or Tony Williams.