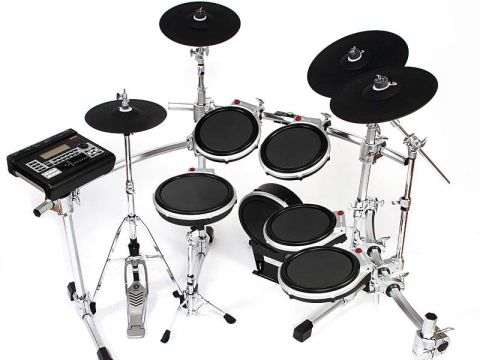 The new DTXtreme III does more than enough to shower itself in glory and it's a real step on from previous DTX's. Feature-rich and user-friendly, the DTXtreme III is a winner on pretty much every level - and this review can only offer a taste of what it can do and the manner in which it does it.

There's no doubt that the world of electronic drums has been an extremely interesting place in the last ﬁve years. Increasingly impressive developments from the two big boys (that'll be Roland and Yamaha) and a steady trickle of good stuff from smaller brands have seen drummers treated to better sounds and more 'natural'-feeling set-ups than ever. And the pace of change shows no signs of slowing.

With Roland's new TD-9K on its way and the new Yamaha DTXtreme III Special here, 2008 looks like it might be the best year for e-drummers yet. But how will Yamaha's newbie fare in this competitive sector?

The DTXtreme III Special certainly gets off to a good start. From the moment the rack and an assortment of Protection Racket cases rolled off the courier van expectations were high, simply down to the fact that the rack looks so darn good.

There's something rather traditional about the hexagonal, three-sided rack - which is unique to the 'Special' version of the new DTXtreme series - and it looks like it means serious business. It's less hi-tech and more purposeful than the kind of electronic drum rack we've become used to, and the DTXtreme III immediately renders everything else a bit dated in the aesthetics department.

And the rest of the kit is equally pro in terms of visual appeal. The ﬁve rubber-faced drum pads, PCY 'cymbal' pads (a pair of 13"s and one 15" ride), KP125 kick and the RHH135 hi-hat are all hefty pieces of kit - simple but streamlined both in terms of looks and operation. And the DTXtreme III brain is a thing to behold, with a huge LCD display, a mini-mixer for the kit and clearly laid-out transport and editing buttons promising an easy ride as far as delving deeper is concerned.

"A kit with high aims such as the DTXtreme III needs to be simple to set up, despite the level of complexity it offers from a sonic and functional viewpoint. And the kit proves to be just that. The almost over-engineered clamps and hex-rack make getting the thing together wonderfully painless".

The spec of the playing surfaces is commendable too, with three zones allowing head, rimshot and cross-stick sounds from the drum pads (where applicable) and bell, bow and edge tones from the cymbals. Where such acoustic emulation is unnecessary - in the case of some of the more otherworldly electronic kit presets, for example - these features are brought into play to allow loops to be triggered from the rims of the pads.

A kit with high aims such as the DTXtreme III needs to be simple to set up, despite the level of complexity it offers from a sonic and functional viewpoint. And the kit proves to be just that. The almost over-engineered clamps and hex-rack make getting the thing together wonderfully painless and, aside from where memory locks are used on cymbal arms etc, it does away with drum key-operated ﬁxings.

Wiring up is also a breeze thanks to a 'snake' of ¼" jack cables that keeps everything neat and clearly labelled to indicate what plugs in where. It needs to be clear, because the rear of the DTX brain discloses its high aspirations: there are MIDI in/outs, USB connections, digital S/PDIF outputs for recording, six individual jack outputs, 15 pad inputs and an Aux/Sampling input (yes indeed, you can sample with the new brain, although you do have to stump up extra memory in order to do so).

It's not short of ways of hooking up to the outside world, whether that involves PA systems, personal monitoring or digital recording set-ups.

First off, it feels great to sit behind. This is not a kit for the most bijou bedrooms, but its size means it's easy to get comfortable with the DTX; good-sized pads and the generous dimensions of the rack avoid feeling cramped and reinforce the impression of a very serious kit indeed.

And as soon as headphones or monitors are connected, the DTX is quick to show off its prowess as far as its sonic arsenal is concerned. Several Yamaha acoustic drum kit classics are to be found lurking in the presets, and playing around with the Oak or Beech Custom kits reveals emulations of real depth and ﬁne playability. Yes, the 'originals' are inﬁnitely more responsive, but the DTX versions are gratifyingly good.

Rat-a-tat machine-gunning on snare and toms is kept to a very acceptable minimum and, with a little tailoring of technique, the brain and pads can deliver a remarkably convincing recreation of a 'proper' drum kit.

There are few disappointments in the sound of the DTXtreme III. There's a real sense that everything's got beeﬁer and more '3D' than in previous Yamaha outings, with throaty percussion samples and crisp, weighty electronic snares and kicks pulling no punches. And the module is as straightforward to use as is possible for something so well developed and stuffed with ability. The dedicated sliders on the front panel mean that tweaking the mix of kick, snare, toms, cymbals and the like is possible to do 'on the ﬂy', while the collection of buttons beneath the big screen allow fast access to deeper editing.

It's all quite intuitive, and getting to parameters like pad sensitivity and subsequently altering to taste rarely takes more than a handful of presses. The transport controls to the bottom left of the front panel are used for sequencing (the DTX has a two-track, 152,000-note sequencer built in) and play-along tracks, and this latter group of 44 songs is another ace up the DTX's sleeve.