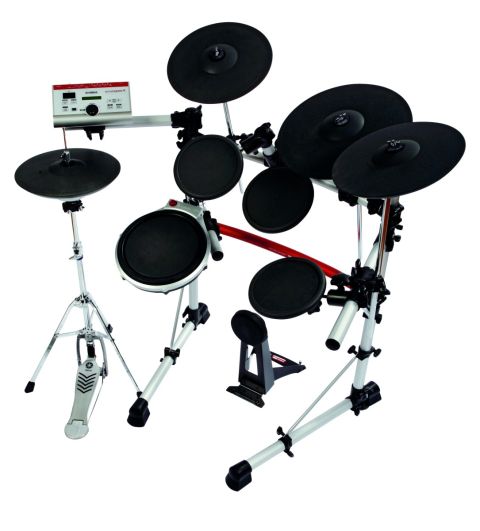 The DTXpress 4 represents a big step up by Yamaha. Gone are the underwhelming sounds and 'home organ' backing tracks that cropped up too often on previous DTXs - in their place is a more developed tonal palette and some quite usable loops. If mesh heads are a deal-maker you're still better off looking elsewhere, but if you're more open minded we suggest a trip to a Yammy dealer pronto.

More sounds, more preset kits, more play along songs - that's generally what's expected from a new electronic drum kit release. It's rare that manufacturers break with the 'bigger is better' ethos, after all.

So it was something of a surprise when the DTXpress 4 arrived with the news that it has fewer than half the sounds of the outgoing DTXpress 3, fewer drumsets and only 60 percent of the songs. Doesn't sound like progress does it? Despite this, there was something about the news that had us more excited about this DTX than any previous incarnation.

In the past, some have felt slightly let down by the sounds, stumped by the user interface and somewhat short changed by the rubber-padded playing surfaces of the DTXseries. In terms of sonic performance, it's been hard to avoid the conclusion that Yamaha would be better off concentrating on supplying quality rather than quantity.

So is less more on version four?

Top of the line

The latest DTX comes in both Standard and Special varieties, and it's the latter that we're dealing with here. The upgrades over the less expensive Standard include an extra cymbal pad (three instead of two) and a bigger snare pad (10" as opposed to 8"), but there are more similarities between the two models than there are differences.

Both are based around the completely reworked DTXpress 4 module, which is far better to use than the previous version, and both feature the same attractive curved rack. This is a good looking set-up that is both rock solid and easy to move around. Even with all pads attached, it's an easy task for two people to just grab it and shift it.

Before we get to the not-insignificant arrival of that new brain, a word about the physical nature of the DTXpress 4. It won't have escaped your attention that, unlike certain other competitors, the Yamaha still features rubber pads. They're a good size (13" and 15" in the case of the cymbals) and that 10"snare pad also sports a controller to quickly and easily adjust parameters like snare tension, pitch etc. But there's not a 'real-feeling' mesh head among them.

There will be those who immediately discount the DTX because of this, but we wouldn't. Mesh head pads are great - they're easy on the wrist, they're quiet and you can generally tension them to taste - but we don't object to good rubber pads like these. The rubber compounds used nowadays are forgiving and playable, so it's sensible to judge a kit as a whole rather than focussing solely on this feature.

The DTX pads are a known component from the DTXpress 4's predecessor, but the module that accompanies them is a completely new proposition. Containing 427 individual sounds where version three boasted 990, the DTXpress 4 brain breaks away from the half-rack format of the previous type.

Instead, the whizzy stuff is built into a silvery brick with a big display. This makes for less squinting at a thin LCD window, and changes to the software brings adjustment of parameters to within easy reach. Fewer button pushes are required to get to what you'll want to tweak most often, and although the DTX still offers a very decent level of control over your sounds, it's a pretty intuitive device.

Sound as a pound

And so to the sounds themselves. It seems that Yamaha has indeed upped the ante in terms of quality while lowering the number of tones on offer and, in turn, the DTXpress 4 is significantly better than that which has gone before. Apparantly some of the Motif (flagship Yamaha synth) bods have had some input into the sonic performance of the set-up, and it definitely shows.

Where Roland has always excelled at raiding its back catalogue of classic drum machines for tough, three-dimensional electronic sounds, Yamaha has tended to lean towards the cheesy. No more however- the various electronic kit sounds on offer here stand up well to pretty much anything else that is available, shedding any cabaret image in the process.

Some cheeky relabelling of kit presets sees much-loved 8- and 9-series machine sounds (if you're familiar with electric kits from days gone by, you know the ones) well represented, with heavy kicks, crisp, clean hats and poppy snares very much in evidence. There's a good selection of usable breakbeaty sounds, grungy and dirty, to be found here too, and fans of clean, fusion-style acoustic kits, well-created ethnic percussion and the like are also well-catered for.

The DTXpress 4 doesn't overburden itself with too many of the same types of noises, instead there are a handful of really good kits designed for each particular rhythmic ballpark.

If you're more interested in acoustic emulation than electronic sounds then I've saved the best for last. The feather in the DTX's cap is a couple of multi-sampled acoustic sets, handily situated at the very top of the unit's menu.

The Oak Custom and Maple Custom preset kits (hmm, wonder where they got the source sounds from) are truly impressive, featuring layered samples at different velocities to come as close as possible to the tonal feel of a real kit. With the acknowledgement that no e-kit will ever feel like an acoustic set, this pair of DTX presets does a fantastic job of providing almost-the-real-thing at any volume, straight from the box.

Especially impressive are the toms and cymbals which are full and multi-dimensional, and zingy and clean respectively. This version of the DTXpress 4 allows you to get the most from the acoustic kits. Its larger ride cymbal and bigger, three-zone snare pad offer that extra sensory experience over the Standard version, and is worth the extra wedge if you can afford it.

Splash the extra cash and you'll find yourself closer to the kind of feel offered by an acoustic set with its different-sized components. No, it's by no means the same and yes, we'd love a hi-hat similar to Roland's V system, but all in all, the DTXpress 4 does more than enough to seriously move the game on.