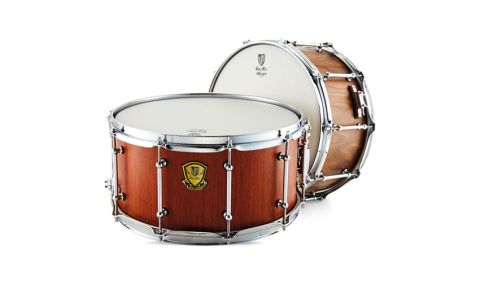 The standard of workmanship and the overall snare drum sound belie the drum's price tag. Absolutely cracking and highly versatile.

We enjoyed Worldmax's metal snares back in 2009, now the firm is back with a choice of new wooden shells. Here we take a look at a 14"x7" walnut snare.

Although Worldmax has been making drums, replica spares and drum accessories since 1991, its snares were not readily available in the UK until 2006.

It was some three years later that we checked out some examples of the metal snares from its Vintage Classic series. These impressive yet affordable metal-shelled drums of brass and steel gave a great vintage vibe while the aluminium snare helps create some modernity.

It has taken a few years, but now the range of wood-shelled models is steadily on the increase, catching up with the variety of Worldmax metallic models.

We have this 14"x7" walnut-shelled snare from Worldmax for review this month. The metal components comprise 2.3mm thick triple-flanged steel counter hoops, 10 10cm-long classic retro-style tube lugs and a fairly basic side-action strainer partnered by a die-cast butt-end. The shell is made from solid wood staves, cut and shaped by CNC machinery, creating precision joints interlocking each of the 24 pieces.

The solid chunks of wood have their grain running parallel to their vertical plane and are, for the most part, pretty closely matched. If it wasn't for the slightly random swirls of the walnut, it would be difficult to detect the precisely-machined seams.

One thing you'll notice upon first inspection is that this snare is surprisingly heavy. It can't be the metal work - this looks sparse in comparison to the expanse of the richly grained shell. Upturning it and peering in through the clear snare head reveals it's the incredibly thick shell wall that is responsible for the mass.

The shell is a respectably chunky 12mm thick, which could potentially thin-down the drum sound but allow it more cut - just what we want from a snare. However, the depth of the drum should also provide it with more muscle and the triple-flanged steel hoops and single-ply head will create some of that raw openness - we could be in for a treat!

One of the pleasures of getting your mitts on a brand new wooden snare is the aroma from that freshly-worked wood. Tapping with our fingers around the edges of the head and fine tuning, we are treated to a beautiful woody waft as the air is expelled from the large breathers.

As we lay in with the sticks, what is immediately obvious is that this walnut snare has an underlying low fundamental with plenty of body. Winding half a turn up on the 10 tension bolts on the head raises the pitch a semi-tone and tightens and crisps the drum sound.

Keeping the batters the same for now, we try some cross-sticking and the sweet-spot on the snare is found rapidly, creating a cracking nutty 'tock' which we find ironically amusing but nevertheless impressive.

Brushes take full advantage of the coated head, producing an extremely healthy penetrating swish. Even with the light brushes in hand, striking across the head and rim manages to coax plenty of that overtone, demonstrating its projection potential.

While not quite table-top tension, the drum readily accepts a higher degree of tuning. This certainly helps elevate those sticks, producing some wicked double-strokes, seamless buzz rolls and single stroke rolls with the occasional tasty ghost note, and shows a more sensitive and expressive side. Cranking it up gives the walnut more edge and bite, opening-up this powerhouse.