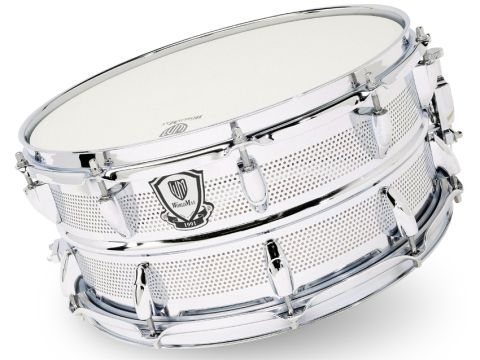 Despite its resemblance to a colander for draining your pasta, the Micro Vent sounds rather special. If you want a really sharp yet sensitive budget steel snare, look no further.

WorldMax has been with us since 1991, starting out as a breakaway from Pearl. It's proved its staying power by adopting an unpretentious approach, providing professional sounding snare drums at bargain basement prices. WorldMax now boasts a wide selection of snare drums alongside parts and hardware, which is the company's bread and butter.

The Micro Vent snare has a 14"x6.5" chromed steel shell which has a centre bead for strength and is perforated with thousands of small holes. The effect of the holes is to make the shell lighter than usual. There are 20 single-ended bullet lugs and a substantial shield badge proclaiming 'Made In Taiwan (since) 1991'.

The familiar generic strainer is a sturdy model which has proven reliable, if not sexy. Incidentally, if you Google 'Micro Vent snare' you'll find an OCDP 14"x7" drum which looks similar to this, but has die-cast hoops to "help keep the sound under control."

The effect of cutting holes in shells is generally to dry the sound, increase the attack and reduce sustain. The expellation of air is eased so there's more punch, the sound is louder with fewer overtones. This is what you get with the Micro Vent except that we weren't expecting quite so much immediacy and sharpness of snare response.

The toppy effect was more like you'd expect from a 3.5" deep shell than a 6.5". There's a really sibilant, snarey rasp, but it's fruity and rich, not dry and sterile.

There's been a glut of snares with big holes in recent times and of course it has been normal for decades to hole bass drum front heads, the goal being to reduce boom and boost depth, clarity and volume. Snares with major vent holes go back at least to Ludwig's 1970s Slotted Coliseum. However, we've never heard a holed 6.5" snare drum so raspingly sharp as this one. On top of that, the rim shot produces a lively ring - and once again we were shaken, as we expected the holes to dry the tone, to make rim shots and cross sticks darker and shorter.

But, in fact, quite the opposite. We got two students to play the drum in a live performance class so we could confirm what we thought the drum sounded like. From out front it really cut through the mix - it undoubtedly has a high pitched crack, but it doesn't sound thin, it's rounded out by a fatter tone coming from the deep shell.

You can go two ways with this drum. Wallop it for the louder metal-edged species of raawwwkkkkk. Or focus on the extra sensitivity that the sharpness also delivers and exploit the clarity that you'd expect from a hybrid of piccolo sharpness allied to that 6.5" depth.