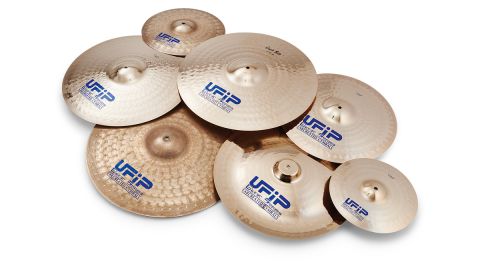 This is a fantastic set of cymbals which will be equally at home in a rock or metal environment and many other genres too.

Italy is famous for many things. However, you may not know the country has long been associated with cymbal production.

UFIP (Unione Fabbricanti Italiani Piatti), is a Tuscan-based company, originally set up as a cooperative of four Italian manufacturers.

Over the years UFIP has taken a bit of a back seat, (especially against all things Turkish), for lack of an efficient distribution network. UFIP looks to be on the up with a range of new models and the recent appointment of the Music Shipping Co as UFIP's UK distributors.

Craig Fenney at Music Shipping says, "We have a select number of UFIP UK Specialist Centres and have good coverage in the UK already."

Today we have a tasty selection of these Italian thoroughbreds which hail from UFIP's Bionic Series. This assortment consists of 11" splash, a pair of 14" hi-hats, 17" crash, 19" china cymbal, 20" crash, 21" crash/ride and a 22" Heavy ride. Due to their fundamentally bright tonal characteristics, the series is aimed primarily at rock and metal players.

The majority of the models here have been subject to some rigorous hand-polishing, awarding them a glassy, gleaming finish. The exceptions are the Heavy ride and top hi-hat.

Apart from a quick buff and hammering, the upper surface of both has been left in their natural raw state from the Rotocasting. This method of casting is unique to UFIP - where the molten B20 bronze is poured into a rotating cast spinning at 1,000 RPM. UFIP says this centrifugal process helps eliminate impurities from the metal, removes air pockets and produces a thicker bell.

There is a high standard of manufacture evident here - you can't help noticing the high levels of engineering and detail. For example, each and every centre-hole drilling is smoothly engineered with no rough or sharp edges to gouge deep into the nylon tubing of your cymbal stands - just perfect. This high standard is also evident upon the extra vent holes of the lower hi-hat cymbal which features smoothly bevelled edges - truly impressive.

Many of the cymbals appear heavier than average models we get to check out - there's a lush lot of metal here. For example, the top of the 14" hi-hat weighs 1.3kg, whereas the top cymbal of my 14" Zildjian New Beats is around 900g.

It is the thickness of the cymbal that determines the pitch - the thicker the cymbal, the higher the fundamental pitch but the slower the response. These cymbals are said to have a bright sound which would make them ideal for their intended market of rock or metal.

The lower hi-hat cymbal is much heavier than the top and the crashes, ride and crash/ ride are bulky. Lighter, but retaining mass in the mid regions, is the sizeable 19" china which looks like some giant parabolic mic pickup. This has the usual china features of a back curved edge, flattened conical bell and is, of course, designed to be played inverted.

The 20" crash has a big and powerful sound with all the cut in all the right places - able to push through the barriers of any acoustic or amplified instrument. The sound produced is never brash or in the least bit trashy.

It's the same for the 17" crash which also has plenty of guts at a slightly higher frequency. Both models respond instantaneously and once you have had a few slices across the edge, the bell of both is also extremely useful.

The crash/ride is not the usual compromise but useful in both respects of a ride and a crash. The pitch is much lower than on the 22" ride, for example, and crashing is perhaps marginally slower than the two dedicated models.

However, the ride builds but is never overpowered by the 'crash' unless striking at the edge.

It's an easy process learning how to control the china and finding those sweet spots. Gauging when and where to strike before it blooms to burst, filling the air with a raspy, gong-like sound that is loud and penetrating.

The splash proves effective but we feel that the use of all that bronze on an 11" model is overkill. Being a comparatively larger diameter increases the price dramatically and we feel it would be preferable to see smaller, more cost-effective models available. Music Shipping say UFIP will make and supply custom models if required, so that is good news.

With help from an initial spring adjustment and the venting of the lower hi-hat cymbal, the pedal response is instant. Fully closed we have a clean, crisp 'tick' given as the strikes are received, with clarity and articulation. Half-open it's an authoritative raw 'swish', ideal for a chorus or bridge. Striking closed and timing each pedal-lift to produce a 'tiss-tat-tat-tiss' is pure jazz.

This jazz ambience continues with the 22" characterful ride - but when struck with conviction shows its metallic properties. The bells of the 22" ride and the 21" crash/ride are capable of lifting any musical passage, confirming their versatility.