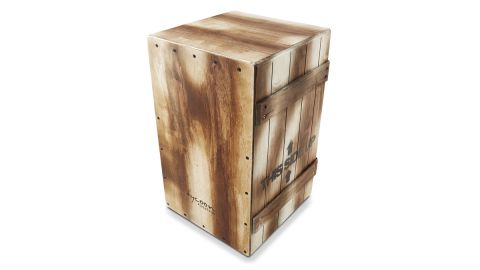 This is a good sounding cajon which has plenty of body and feels good to perform with. However, it is hard to forget the price which we feel is difficult to justify being so expensive.

Upon the percussive podium this month is the brand new Crate Cajon from Thai eco-warriors Tycoon Percussion.

Tycoon's original Crate was created as a "tribute to the roots of this instrument, which originated from African slaves in Peru using old wooden crates to play musical rhythms on as a means of expressing themselves musically".

In keeping with the design concept, Tycoon has created this new model to complement the original and successfully maintain the appearance of an old and well-used packing case.

The original Crate had a much darker appearance but, with just a cursory glance, the second generation model appears to be of a similar construction with only cosmetic differences. Indeed the material of choice for the body (as with many of Tycoon's typically ecologically-sourced woods), is Siam Oak with an undefined Asian hardwood for the tapa.

Taking a peek into the rear sound hole shows construction is similar to the many other cajons that we see in the pages of Rhythm - basically this is made using a simple rectangular box construction with reinforced sides, a central sound pole, adjustable 'snare' effect and a tapa or front panel made from a different wood to that of the body.

Externally, however, this looks quite a bit different from the norm. It has a cool finish created with some fat and random brown lines over a cream wash. Each visible panel (with the exception of the front plate), has routed furrows giving the appearance of individual panels. This, together with packing-case type graphics of 'FRAGILE' and 'THIS SIDE UP' and the addition of decorative wood 'struts', gives an authentic but tongue-in-cheek vibe to the cajon.

The snare effect is provided by four copper guitar-type strings stretched tightly against the front plate. They are held mid-point by a single stripe of Velcro and formed into two pairs in a 'V' shape with adjustment via two Allen bolts located to the underside. Additional effects are provided by a set of small jingle bells which are attached to the sound post.

We must admit to being initially sceptical of how all the routing troughs could affect the sound and whether this box is simply a novelty item.

However, it doesn't take long before we find these fears were unfounded - just a couple of tentative finger taps gets my interest and a mid-point slap shows this cajon is capable of producing an impressive thump which we find myself acknowledging with a meaningful nod!

While the all-essential snare effect is reasonable, it is difficult, if not impossible, to coax those bells to produce even the faintest 'chime' without an extraordinarily hard wallop. However, there is a mass of kit-like and percussion-ish sounds produced with ease - just move the hand-strike position slightly and it's surprising the differences in tones. These can be deep and warm with a surprisingly high degree of resonance which makes us keep going back to have a play.