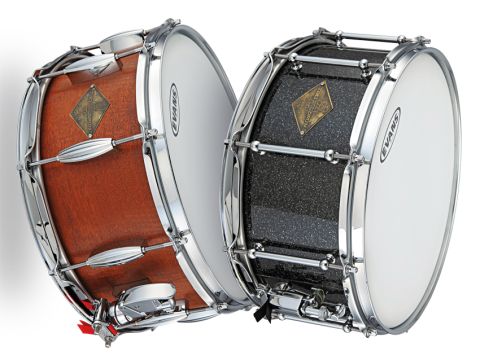 Both snares are a joy to play - well built and versatile. Considering the standard of construction and quality of components, they're great value too.

Hove-based Tiki Drums is run by the multi-talented Preston Prince. A professional drummer for 20 years, Preston is also a qualified teacher, skilled craftsman in demand for his restoration services and all-round rhythmic evangelist.

Up for review are two 14"x6" Tiki snare drums, a 10-ply maple shell in black glitter wrap and a 5mm-thick solid Beeswing mahogany shell with a natural finish.

Unusually for a custom builder Preston doesn't make his own shells, preferring to delegate this task. He believes that the quality of the finishing and hardware components is just as important as the shells themselves.

His shells are supplied as blanks, and he then finishes and dresses them, and cuts the bearing edges by hand.

Preston sources shells from Keller - the company that supplied DW with shells for many years - as well as Dean Price of Guru Drumworks and US builder Vaughncraft. The maple-shelled snare is built from a 10-ply Keller shell, while the steambent Beeswing mahogany drum is a Vaughncraft creation.

Preston confesses to having an encyclopaedic knowledge of vintage drums and this is reflected in the look and feel of these two snares. The maple-shell drum is dressed with tube lugs and its innermost ply has been primed and coated with three layers of red stain.

Preston says this is mainly for aesthetic reasons, but reckons that if it does influence the sound as well then it will probably be for the better. The snazzy black glitter wrap has been expertly applied with the join cleverly hidden behind the throw-off.

It has a fine-grain structure with plenty of interesting details within. As if to accentuate the beauty of the wood, the shell has been oiled and waxed to a lush satin finish.

Both drums have reinforcement rings - another 10 plies-worth in the case of the maple snare and a single 6mm-thick scarf-joined ring in the Beeswing mahogany.

Bearing edges are cut to a pointed 45° for
the maple drum and a far more rounded 30° on the Beeswing mahogany. Evans heads and triple-flanged hoops are fitted to both drums.

Preston's New Zealand roots are represented in the name and logo of Tiki Drums. 'Hei-Tiki' is a Maori pendant which is worn as a guardian and can also represent fertility, and the gurning face of the depicted figure certainly makes a change from most drum badges.

Both drums are as good to play as they look, but possess their own characteristics. The all-maple snare has a sharp, bright, open tone that fizzes with energy. Played anywhere but dead centre the sound is embellished with musical overtones that, by the time the edge is reached, culminate in a lingering metallic peal.

It's an incredibly responsive drum that can pick out brushwork with a detective's attention to detail while rim-shotting for England at the other end of the scale.

In comparison, the Beeswing mahogany snare is drier and thicker-sounding. The lack of overtones allows the timbre of the wood to really shine through.

Though it doesn't have the same degree of bite upfront there is a hardness present which makes it stand out. I found the hint of darkness in its tone to my liking as well.

I tried it out at a gig with a full-rig PA. I usually have to apply at least one Moongel to curtail ringing; with this snare nothing was required.

Throughout the set, the drum kept backbeats locked down with almost indomitable authority. It was equally capable of being expressive when it came to fills, with rimshots being delivered with a particularly fruity clonk.

The snares are only two of a vast range of bespoke drums that Preston offers. They somehow seem older than they are, Preston's love of classic drums clearly influencing his own creations.