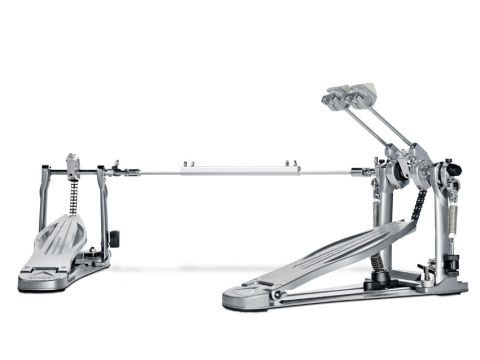 If you're looking to upgrade from a mid-level unit, or for metalheads desperate for the last word in kick drum velocity, as of now your 'to check out' list isn't complete without the Speed Cobra.

There are just a handful of bass drum pedals that can claim to be classics. Unlike kits and cymbals, kick pedals that have proved themselves worthy of legendary status are few and far between.

Camco, DW and Ludwig have all produced such beasts, as has Japanese drum giant Tama. Its Iron Cobra pedal is truly a drum world icon, having been relied on by countless big-name artists on the world's biggest stages over many years.

"It's easy to dismiss 'Speed Spring' or 'LiteSprocket' as marketing waffle, but when pressed into action the Speed Cobra does a fantastic job of silencing the cynical."

But now comes a new pretender in the form of the Speed Cobra, with features borrowed from its well-regarded older sibling and a host of innovative design tweaks to boot.

Tama's tagline for the Speed Cobra is 'Extreme Velocity, Serious Power'. That is a pretty well-defined raison d'etre, and as such the Speed Cobra's new features have two simple goals in common - to increase speed and to increase aggressive response.

Tama points out that these two aims have traditionally been mutually exclusive, with fast pedals losing some power, and powerful models reacting slower than some would like. So what solutions do Tama offer?

Well to start with, a quick overview of the features which the Speed Cobra shares with the Iron Cobra. Such things include the Oiles bearing hinge (as used in the aerospace industry no less), the patented Cobra Coil spring - which is located beneath the footboard to quickly return it to its default position after each stroke - and the Vari-Pitch beater holder that enables adjustment of the footboard link angle independently of the beater angle.

To that already impressive mix, the Japanese company has added several significant new features. The first and most obvious of these is the 'Fast Foot' footboard. Longer than on the Iron Cobra, the Fast Foot board is designed to increase speed of response but at the same time require less effort than previous designs.

In addition, the face of the board is smooth to reduce friction, which Tama reckon will improve control. On top of this there's an impressive new bearing assembly in the shape of the Fastball bearing on the end of the drive shaft, a true round sprocket (which Tama have named, brilliantly, 'LiteSprocket') that's evidently 40 percent lighter than the Iron Cobra's, and the new Projector Beater.

The beater allows the choice of narrow or wide 'striking surfaces' simply by changing the head angle - go for punchy, defined attack with the former or a fatter, fuller response with the latter.

All this talk of new features (and we haven't touched on the chain drive's new Recessed Setting which increases the angle of attack for super speed and light action, nor the new 'Super Spring', designed to offer less resistance at the beginning of the pedal stroke) has left us little space to discuss the actual build quality of the Speed Cobra.

Fortunately, little space is required for this, as it is stunningly good. The Speed Cobra is beautifully engineered and does the Cobra name proud.

If your eyebrows headed skyward at the number of clever feature names Tama has bestowed on the Speed Cobra, a word of warning. For sure, it's easy to dismiss 'Speed Spring' or 'LiteSprocket' as marketing waffle, but when pressed into action the Speed Cobra does a fantastic job of silencing the cynical.

For starters it's an incredibly smooth-rolling pedal. An objective appraisal of the impact of the new bearing mechanisms, for example, is well out of the scope of a review like this, but subjectively it feels wonderful.

As far as we're concerned, hardware that so closely unites player with kit as to almost disappear is the Holy Grail, and such is the sweetness and slickness of the Speed Cobra that it gets very close. We're not Derek Roddy, but even we appreciated the discernible ease with which fast strokes translated from bodily movement to bass drum response.

For metal drummers dishing out high-bpm double bass battery, the Speed Cobra could be your new best friend. But that's not to say Tama's newbie is a one-trick pony. It's so well-conceived and built - with the kind of near-endless adjustment that high-end pedals offer these days - that it could be pressed into service in any genre with aplomb.