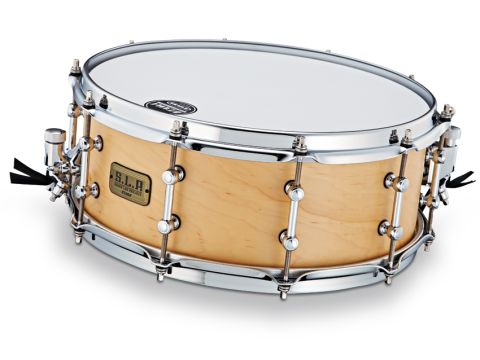 Tama has done a fine job of narrowing down the choice of snare drums and, in among these eight SLP snares, you're likely to find at least one to suit.

Back in May, we checked out the four metal-shelled snares from Tama's eight-drum Sound Lab Project.

Each of the metal SLPs were suitably impressive and though respectably priced, would grace centre-stage alongside snares with a much heftier price tag. Now, though, it's time for a close-up inspection of the four wood-shelled models.

With such a wide and varied selection of snares available today, choosing just the right one for the job can be a daunting task - even for a seasoned pro. In search of what Tama describes as the "right snare drum", the firm has spent a great deal of time researching and experimenting with various types of shell, shell thickness and drum hardware.

From these 'Lab' experiments Tama has produced eight sonically different drums and, as a guide, categorised them into suggested genres and playing styles.

With its natural maple finish and subtle grain, the Classic Maple is perhaps the most understated of all the drums out of the four. This and the Power Maple both feature Tama's triple-flanged 2.3mm steel Sound Arc hoops, specially designed for the SLP series; these have a slight inward-facing top flange which, being wide and rounded, should help avoid any nasty stick shredding.

Though the G-Maple has the smallest diameter here, this is more than compensated for by its plump shell and wholesome 7" depth. Like the other two maple models, this also features the retro-styled brass tube lugs, but is fitted with a Starcast die-cast hoop.

We particularly like the tamo ash outer ply, which is reminiscent of a pattern left in the sand by an ebbing tide - it is a beautifully grained wood.

Certainly the odd-one-out of the bunch is the G-Bubinga which is the only drum to have the gun-turret style Starclassic lugs. With its bubinga burl outer and black nickel metal work, the G-Bubinga is absolute eye candy - only to be enhanced by the deep nickel plating.

The plating and the snare throw-off is the only common element, shared with the Power Maple. The Midnight burl finish of the Power Maple is also quite beautiful, but this is almost too dark to get the full benefit of that wonderful grain with any clarity.

All the wood models here feature Tama's liner-drive snare throw-off and butt-end, which is adjustable at both ends of the strainer - not just the lever end, as on the metal snares. This adjustment has a ratchet system that avoids the snare strainer slackening off mid-performance.

Each drum has the benefit of Tama's Patented 'Hold Tight' washers - this is a combination of a steel cupped washer housing a rubber ring which butts-up and grips against the drum rim avoiding potential de-tensioning.

The first of the four to be played is the 13" G-Maple, which out of the box sounds surprisingly good. Aiming for the sweet-spot centre produces a dry woody crack, then by hitting slightly off-centre, provides only the slightest overtone which is immediately snapped shut, thanks largely to the natural gating effect of the die-cast hoop and smaller diameter.

This drum is at home with tight funk or any song that requires precision strikes - such as 'Superstition' by Stevie Wonder.

There is certainly nothing dry about the G-Bubinga; it's as open as a barn door with lushes of sweet overtone which will help project this to the back of any venue. Having played around with the tensioning, raising it and then dropping it slightly from its previously table-tight factory pitch, we settled on a pitch where the drum produces a tantalisingly powerful and rich snare sound.

After a few whacks upon the Power Maple, we realised this isn't going to sit back in some dark corner. Combining its fundamental power with a well-placed rim-shot across the Sound Arc hoop is akin to firing a double-barrelled shotgun early on a Sunday morning - it will wake everyone!

Playing blisteringly fast is not its bag (think '80s massive snare sounds), perhaps owing to the dampness caused by strainer wires, but it is rather forceful and certainly rocks.

Lastly, up in the basket sits the light, subtle-grained Classic Maple, which at first appears far more laid-back than its Power Maple mate. The Classic is a truly 'classic' sounding wooden snare that seems to respond to all levels of tuning - it's capable of rocking it up or simply taking a laid-back approach and playing some tasty jazz.