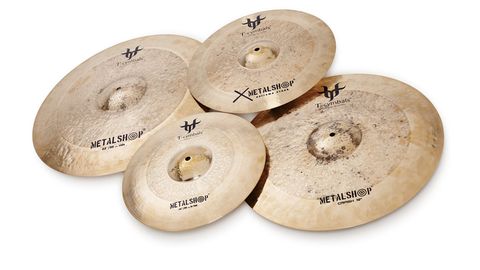 T-Cymbals' Metalshop series offers those players looking for heavier cymbals a broad choice of complex and musical instruments right off the shelf.

Turkish company T-Cymbals prides itself on offering drummers a different slant on buying cymbals; it styles itself as a 'custom cymbal company' and will happily make a set of cymbals to your specification, even down to logo design and colour, in its factory in Istanbul. If you ever fancied a set of 18" hi-hats, or a 24" china (who hasn't?), they're the people to talk to.

For those of us who find ourselves paralysed by the choice offered by its cymbal equivalent of a large box of chocolates, T-Cymbals also offers a broad range of 'off the shelf' cymbals designed to cover practically all musical genres.

All of T-Cymbals' products are hand-made by skilled craftsmen and use a B20 alloy, which is comprised of 80 percent copper and 20 percent tin, with small amounts of silver. T-Cymbals says boldly that "cymbal making is not a secret, it is not about secret alloys or formulas" but that it's all about how you work the metal.

Based on its years of experience making cymbals for other companies, T-Cymbals thinks it has come up with a range of cymbals that offer something to everyone. The 'Metalshop' range is said to be 'heavy sounding' and designed to cut through today's modern rock music.

All of the cymbals share a distinctive appearance - from the bell to about two inches from the edge is very lightly lathed and scattered with deep random hammer marks, and then from the edge in each cymbal is close-lathed - there is a slight but distinct 'ridge' where the lathed section meets the 'raw' section, which shows that material was removed during the final lathing. All of the cymbals on test are 'brilliant' finish, but there's some evidence of the violent processes each cymbal had to pass through to reach this stage.

The bells are somewhere between the 'traditional' Turkish flatter bell and the more protruding 'modern' American style. The ride and 19" crash have hammer marks that extend over the bell, but the 16" Extreme crash and the hats don't have any.

The undersides of all the cymbals show evidence of substantial hammering but have all been close-lathed from edge to bell. The top of each cymbal is screenprinted with the T-Cymbals logo and the Metalshop or Metalshop Extreme stencil design in black, which stands out well against the shining brilliant polished finish. These cymbals will also look good on a stand, if that sort of thing matters to you!

We set the Metalshop cymbals up together and prepared to be assaulted. T-Cymbals say that the Metalshop range is designed for rock, be it alternative, hard rock, metal, or prog.

The hi-hats are heavy and their weight means they cut through immediately - pedal them closed there's a clear and crisp 'chick' and closed sticking is articulate and bright. Half-open they slosh like a dirty laid-back New Orleans groove, and really let you get into long, loud quarter-notes. Fully open they roar but can easily be brought under control with the pedal. They would work as well in a funk setting as a heavy rock one.

The ride looks like a beast, but is surprisingly controlled - the unlathed upper surface working to control the wash and give a defined stick sound. It's more complex than you might think at first glance - a darker fundamental tone gives more of a 'tung' than 'ping' but when you really lay into it each note is clear and you have to be really giving it some welly for it to get away from you. Perhaps as a result of the flatter profi le the bell isn't quite the 'power chorus' type but it cuts through nicely and responds well to complex sticking patterns.

The 19" crash is all about power. Smash it and it opens into a wall of explosive sound, but its size and hammering mean it's lower-pitched but works well with the ride. Crash-riding, it roars, but each stroke can still be discerned.

It also responds well to lighter touches - you don't need to batter it for it to speak easily, but up the intensity and the volume increases. Given its size it decays relatively quickly, meaning it could easily work as your only crash

The 16" Extreme crash is an altogether different animal - high pitched, almost sizzly, it decays quickly but has an almost trashy attack - it cuts through the mix aggressively. Perfect for accenting parts together with the snare, it works best as an 'effects'-style crash rather than as a main crash. Paired with the 19" it gives a distinct metallic edge to the wall of noise.