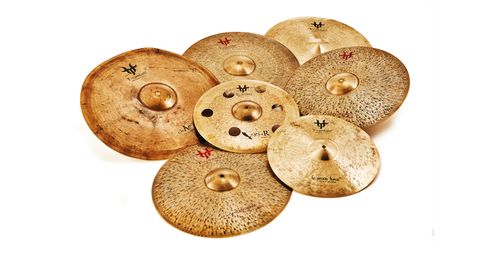 With reams of companies today producing high-end cymbals, you'd be forgiven for thinking that competition would be cutthroat. It seems this is not so for T-Cymbals.

The Turkish company comments in its press material that it instead sees its so-called rivals as brethren, and encourages drummers to try out the competition as well as its own wares before deciding who should get their hard-earned cash. A bold invitation, but one that Rhythm could not resist accepting.

T-Cymbals produces 100 percent hand-made cymbals out of its Istanbul facility. It aims to offer a cavernously wide array of metals for players of just about all persuasions. They turn out everything from the traditional T-Classics to the Metalshop and Punkhead ranges.

For review here we have cymbals from the Janissary-X, Cymbal Maker and La Pasion Turca lines. All cymbals reviewed here are made up of B20 cast bronze, 80 percent copper, 20 percent tin and are hand hammered.

The most unconventional cymbals of the three lines are found in the Janissary-X stable. These effects cymbals are split into several ridiculously-named sub-ranges - Cevgen, Mehteran, Nefer, orKhon, Shaman and kHan.

We were sent two Shaman cymbals, a 21" and 22", and a 16" Nefer. Starting with the Shamans, these are seriously intriguing cymbals. The Shamans are hand-lathed and are peppered with random hand hammer marks which give the cymbals an ungainly look, with its surface covered in dips, dimples and ridges. The sound this beauty emits is every bit as attention-grabbing.

A smash to the bow of the 21" sees the cymbal let out a gruff, gritty growl. Sustain on both cymbals is superb with beautiful, low-end overtones, with the bell of both metals delivering a rock solid ping.

The 16" Nefer, is an entirely different proposition. This O-Zone-like cymbal features six randomly placed, and differently sized, holes. It is also absurdly thin, while placing the cymbal on our stand we were concerned that we may split it clean in two within a handful of smashes. Our worries were greatly unfounded.

When combined with a snare shot, the Nefer packs a brash, brutish tone. Thrashy and trashy with a lightning fast sustain and response - and a slightly darker tone than our Sabian Holy China. It adds some superb beat punctuation, and found its way into our set-up at the expense of our regular China.

The Cymbal Maker range is an altogether more traditional batch of metals. These cymbals, like the Janissary cymbals, feature  random hand-hammering and hand-lathing, but these are far more traditional and will sit easily within a multitude of contexts.

Here we have an 18" crash and 20" and 22" rides. The crash immediately feels at home as the second crash as we power through a classic rock set. A sturdy thwack lets out a warm crash and the cymbal opens up well to riding.

The undersized bell is a little on the washy side for our tastes, and the cymbal's all-round volume isn't quite loud enough for us to entrust it as our main crash, but it would be a cracking choice for everything from pop to blues thanks to the cymbal's tonal mish-mash of modern and vintage.

The rides are warmer in tone and, to us, seem tailor-made for jazz. The 20" has a superb 'ping' but is also able to be crashed which brings it back into the pop realm and even, at a push, rock. The 22", as you'd expect, is more substantial in its solid tone and is again a versatile performer.

The final of our trio of cymbal lines is the La Pasion Turca - 15" Jazz hi-hats, 20", 21" and 22" rides. Now these really are something special. The rides are capable of beautiful articulation with sticking superbly well defined with a beautiful click greeting us on the gentlest of taps - perfect for your jazz licks and ten-to-tens.

One of our few gripes for the range is that the bell of the 20" feels a little insubstantial, but once we get up to the 22" this concern dissipates. The hats, meanwhile, are sublimely controlled in their tone, replicating the kind of sound you'd expect to hear from your ride.