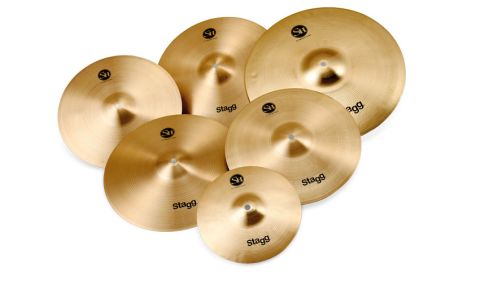 The SH may be Stagg's cheapest series, but for such budget cymbals they are unusually refined in tone. B20 bronze, hand-hammered cymbals at knock-down prices.

Stagg cymbals from China have been with us since 2001, offering B20 bronze hand-hammered cymbals at shockingly attractive prices. When we first encountered them the quality control was not perfect - there were occasional glitches in the metal - but the sound was always impressive. Also, it was not possible to assess the longevity. Well, we have had some for almost 10 years now and we've had no problems.

Currently there are nine different series of Stagg bronze cymbals, all cast from professional B20 alloy and the Single Hammered SH is actually the cheapest of them all.

We're told by Phil Woods of Stagg's European distributors EMD that, "Stagg has been keeping new product launches to a minimum. Stagg believes that in essence drummers are not looking for some revolutionary design. Therefore Stagg has focused on more detailed quality control checks and the development of better hand-hammering techniques.

"The SH hand-hammered cymbals have gone through many small improvements. Cosmetically, they have a new, smaller logo, less printing on the cymbals and a new buffing process, giving a cleaner, fresher finish."

The review cymbals have a regular satin finish, with uniform shallow hand-lathing top and bottom and extremely light hammering, almost unnoticeable. We still found the occasional small glitch, a slight dimple, which indicates the manufacture is, unsurprisingly, not quite up to the rigorous standards of the most purse-stretching cymbals. Such blemishes are however small, only noticeable on close inspection and should not affect the cymbal.

Because the cymbals have just the single light hammering and lathing they are less labour intensive in production than other more complex Stagg lines (for example, there is a DH, Double Hammered, line). Thus the Single Hammered line is the cheapest of Stagg's nine series, but this does not make it the poor relation, sound-wise.

The cymbals are still forged from B20 bronze, hand hammered and lathed. What the lack of extensive hammering does mean is they are a little short on projection when compared with more heavily-worked cymbals. And overall what we found was that while they had universally clean tones, this meant a slight lack of tonal complexity, while the initial, impressively explosive crash tails off relatively quickly.

The 10" Splash has a satisfyingly snappy attack with a strong underlying bell-like note, giving it solid body over a stabbing 'tssss'. It really punches above its weight. Along with the four Medium crashes it makes up a well-balanced set, although while the 14", 16" and 18" form an evenly graded trio, the 15" is slightly different.

The reason for this we think is that the 15" has a smaller bell relative to its diameter than the other three. Actually smaller than on the 14". This makes it splashier, faster and brighter in tone, while the 14", 16" and 18", all with classic, large high-domed bells, have extra meat, more depth and fractionally more sustain. What all four crashes share is a pleasing tone with clean and fast response times.

As previously mentioned, the only thing stopping them being top class cymbals really is that slight foreshortening of sustain and shallowness of timbre which the extra working of expensive cymbals bestows. It's most noticeable by the time you get to the larger 16" and 18" crashes. But to reiterate, at these prices it's unfair to be too sniffy.

Finally there are the 14" hi-hats. The same lack of extensive hammering renders these a little flat when closed or stepped. The half-open shouldered sound though is commandingly dark, steamy and loud. Closed down, that darkness translates to dullness: the stick tip sound is clear enough, but there's not a huge amount of character beneath it. On the plus side the hats won't annoy your band/singer, they are tasteful and like the others in the SH series, warm and smooth.