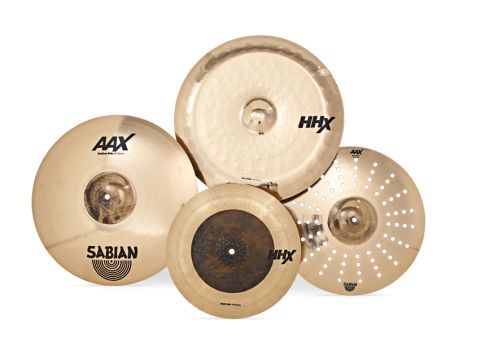 Interesting one-off cymbals, but they won't be for everybody.

Bright marketing idea from Canada's finest: invite you, the player, to decide which new model cymbals sound best and should be put into production.

Sabian's Players' Choice initiative saw 12 new models demoed last winter by top Sabian endorsees such as Bozzio, Weckl and Portnoy. Sabian fans were then invited to take part in a web-based knockout competition and the four models left standing are the ones we have here for review.

Each of the original 12 cymbals involved a new concept brought to life by Sabian's Vault artisans. They are all pro models and the four winners are a ride, china, crash and hats.

The 20" AAX Stadium ride is medium-heavy with a large un-lathed bell and is claimed to bridge "the gap between the AAX Stage and Metal rides". The name of the 14" HHX Click hats refers to Sabian's contention that they have an electronic click-track quality. They combine the high-profile shape of the AA series with HH and HHX hammering, have fully-lathed bottoms but only half-lathed tops.

The 20" HHX Zen china has an unusual convoluted profile with a normal round bell, allowing it to be played the usual way up (not inverted like most chinas) - and the rim is bent down for easy crashing and riding. It's traditionally hand-hammered but also has extra HHX-style hammering to flatten out the playing surface next to the bell.

The 18" AAX Aero crash is so-named because it is full of holes. We make it 19 rows of four small holes radiating from the centre to the edge.

It was inspired by Sabian's Holy Crash, rather than the now familiar O-Zone series with its much larger holes. For added projection the cymbal has an AAX X-Plosion raw bell. There are also 16" and 20" Aero crashes - also Players' Choice winners - but not reviewed here.

It's important to state again that each of these four cymbals is a one-off model, not (yet) representative of any new series.

Zen implies inscrutable and the 20" HHX china is more subtle and sweet, less trashy and more musical than many chinas. This means that if you ride it by walloping the edge with strong quarter notes (the way chinas are often assailed these days) the result is a more harmonious racket than is usual.

The way it sits on the stand makes it easy to ride, as well as in a more studied stick-tip manner if you prefer. The overall sound is full-bodied, but it's deep, warm and smooth for a china.

If the china goes 'tang' the Stadium ride goes 'tssss'. The stick tip response is beautifully crisp, yet quite high-pitched thus thin and piercing. Somewhat disembodied from this there's a warmer and spreadier background wash.

The ride responds well to playing quite hard, as does the bell - which is big and un-lathed. You need to catch this near its base with a well-aimed glancing blow from the stick shaft to get the stadium-best out of it.

While the ride has a rather tinny, shrill body the 14" HHX Click hats have a dark and mellow closed sound. Similar to the ride though, the stick-tip response is distinct, and if you apply pressure with your foot the pitch raises way up so you can get some novel effects, while the pedalled 'chip' sound adds breadth and complexity.

Played part-open the sizzle sound remains deep, and live with a band we found these hats didn't cut through as well as, say, Sabian's HHX X-celerator hats. But as the Click moniker implies they should record discreetly.

Sabian's O-Zones were, as far as we're aware, the first crashes with holes in them and this 18" Aero differs by having a much larger number of smaller holes. The holes reduce the mass and thin the sound, making it shorter, faster and punchier.

So Sabian has given the cymbal a large heavy bell, presumably to compensate and aid projection. The result is a fast-reacting, bright and splashy crash that will add startling new colour to any set-up.