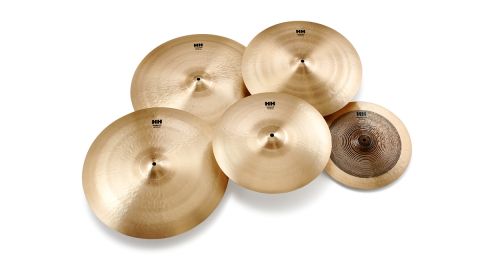 A worthy addition to an already well-established line of cymbals. The Sabian Vanguards have the ability to work well in almost any style of music and play beautifully.

In 2015 Sabian re-released its classic HH range under the guise of the HH Remastered series.

This year, the company incorporated the new Vanguard cymbals into its Remastered series as a further throwback to traditional cymbal making - something Sabian is now even more familiar with since the recent acquisition of US cymbal company Crescent (co-founded by none other than New Orleans funky drummer, Stanton Moore). In fact, the name for the series itself comes from Crescent's former Vanguard Series.

As with the rest of the remastered Hand Hammered range, the Vanguards are designed to offer more traditional characteristics. Shared traits include the natural bronze finish, thinner profiles and the relentless hand hammering that is carried out by Sabian's expert cymbalsmiths. Sabian boasts that its HH cymbals can be hammered in the region of 2,000 to 4,000 times.

The Vanguards are made even thinner again, with lower profiles and undersized bells. The smaller cup and extended profile is designed to "deliver clean, woody stick definition for such a thin cymbal".

The traditional finish, used top and bottom, is now even smoother due to the 'pin-point' lathing techniques used. This is supposed to offer a more even timbre across the surface of the cymbal. Sabian suggests that these cymbals will be well suited to players that want darker cymbals with quick responses.

Visually, the hi-hats are the black sheep of the family as they feature largely un-lathed sections. The insides of both hats are left with a completely natural, baked-on look, while the outer two-inches of the outsides are lathed back to match the finish of the other cymbals. The dark sections on the top and bottom have been line-lathed periodically all the way up to the bell, leaving the hats with a rustic, almost spiral type pattern across their surface.

Another subtle visual detail which helps to reinforce the vintage vibe of these cymbals is the lack of an enormous Sabian logo. In fairness, this can be found on the underside of each plate, but when looking from the top, you only see a modest 'HH Vanguard' logo with the size of the cymbal printed underneath it.

There's also the standard laser etched 'Sabian Canada' watermark positioned just above the logo. This really allows the understated natural beauty of the carefully crafted cymbals to shine through.

Save for the hi-hats, the Vanguard cymbals are not labelled as 'crashes' or 'rides' but defined simply by their size. Sabian says this is because they are so versatile, can be used for any application and that it's down to the player to decide how they want to use them.

Despite at first automatically pigeon-holing the larger 20", 21" and 22" cymbals as rides and the smaller 16" and 18" as crashes, we realise this clearly should not be the case, especially in the world of the HH Vanguards.

Each and every cymbal possesses an impressive stick definition, giving off sweet and complex sounds right from the off. With perhaps the exception of the 16" model, each one sounds legitimate as a ride cymbal. When crashed they're explosive but in a controllable way, with the overall darkness of the cymbals offset by a miraculous brightness that helps them to cut through whilst lending a modern characteristic to an otherwise classic sound.

This goes hand-in-hand with their fairly rapid nature, quickly responding to harder strokes and offering a warm yet effortlessly powerful resonance. The undersized bells are more versatile than you might imagine and despite being particularly suited to Latin-jazz styles, have the ability to cut through very well within funk and even rock styles.

The 14" hi-hats are also complex in tone and do well to complement their larger counterparts. When closed they produce a lightning quick 'chick' sound which is amazingly dry but has a softness to it -they're dynamically very responsive. This theme transfers to the stepped hi-hat note which has a real bite to it, managing to cut through the wash of the bigger cymbals without issue. Open, they are decidedly old-school, giving off a dark, dry roar when coaxed. Great for jazz!

With the flatter profiles, the Vanguards are incredibly expressive and respond well and quickly) to various changes in dynamic level and in position. Being able to ride and crash them almost simultaneously whilst always maintaining a buttery smoothness is what really makes the Vanguards such wonderful instruments.

The 22" is our favourite as it encapsulates these traits in the best way possible. Dark and thin, responsive and with a softness that allows you to really dig in.