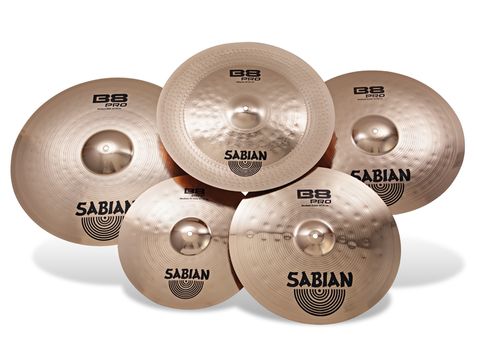 B8 Pros are aimed at drummers ready to move up to their first serious set of cymbals, and their brilliant finish and intensive hammering certainly makes them look like 'proper' cymbals.

Though priced as an intermediate range, Sabian's B8 Pro Series has aspirations to something higher, a fact evident in the 'Pro' suffix of the name.

Originally launched in 1991, Sabian saw the 20th anniversary year as an opportunity to give the range an upgrade.

Sabian says that it has drawn on all of its considerable knowledge and experience of cymbalsmithery in order to do this without altering the prices.

Like the models they replace, B8 Pro cymbals are cut from sheets of B8 bronze rather than individually cast and are machine-hammered and lathed. The individual cymbals have a typically B8 orangey-yellow glow, which is given added radiance due to the brilliant finish.

New wider hammering patterns have been introduced and the results are easily visible beneath the sheen. Sabian also claims to have altered the bell profile slightly to improve the sound.

Bands of tightly clustered lathing cover the tops of the cymbals. The grooves are deep enough to create a rippled effect which is easily detected when running a finger from the centre hole to the edge.

Underneath, the lathing is less intensive - the bands are wider-spaced and shallower, making for an altogether smoother finish. As before there is a wide choice of crashes and splashes, with many of the crashes available in three weights - Thin, Medium and Rock.

Hi-hats and rides are not quite as well catered for, with a single diameter in two different weights being the only provision. Three sizes of china along with a china splash are also offered.

The five models sent for review include examples of all B8 Pro cymbal types except for a splash.

Sabian has enlisted the talents of endorsee Tim Yeung (All That Remains and Divine Heresy) to help promote the range, and videos of him putting the B8 Pros through their paces can be seen on the Sabian website.

As your creaking reviewer possesses neither the youthful looks nor the fearsome level of chops of Mr Yeung, it's unlikely that footage of our tests should be uploaded.

First impressions of the 14-inch Medium hats are of a prominent top end that means they project well. This abundance of high frequencies also gives the hats a precise feel and stickings are reproduced cleanly.

Shouldering the stick flat across the top cymbal brings out a broader sound that begs for a roaring backline to crunch out eighth notes over. Played with similar aggression but half open, the hats soon accelerate into a fierce wash.

A pair of Medium crashes (16 and 18-inch) are up next. Both cymbals feel firm to touch and, though designated as medium thickness, they are noticeably heavy.

The 16-inch model opened with a full note enveloped in brightness. Decay is initially quite quick but as the top notes slither away, a more drawn-out fade lingers on. It's something of an 'on' or 'off' cymbal, supplying sharp accents on cue.

The 18-inch crash is deeper and slightly richer, but still cuts through with aggression. As you'd expect, it steps up in volume terms, while the decay is smooth and uneventful.

The 20-inch Medium ride is the lighter of the two B8 Pro rides available, but again is a substantial chunk of bronze. All that weight guarantees a high tuning (the heavier the cymbal, the higher the pitch) and the stick sound on the bow is bright and clean. As such, patterns are extremely well-defined, if on the glassy side.

Moving on to the bell, the sound changes abruptly, becoming harder, more metallic and completely removed from the rest of the cymbal. The bell's assertive tone really stands out and compares favourably with more expensive ride cymbals.

Rounding things off is the 18-inch Chinese. At lower dynamics it responds with an angry buzz and riding is possible with the tip of the stick. But let's face it, the cymbal's target market is more likely to be laying into it, and here it snaps back with an authentic snarl of trashy venom.

Of the selection here, the hi-hats are the most versatile performers while the two crashes are assured. Decent ride cymbals are notoriously difficult to make on a budget but the ride here is pretty decent, all told - the bell sound being worth the price alone - and the Chinese is spot on.

Despite the revamp, Sabian has kept the prices pegged back to where they were before, which is keen.