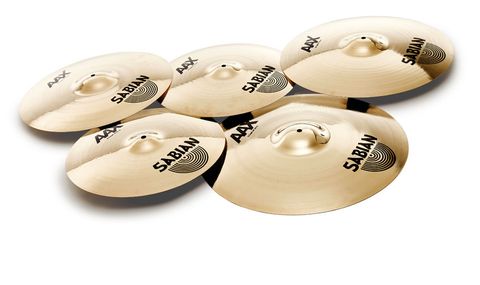 The V-Crashes are archetypically modern cymbals and make a fine addition to Sabian's AAX Series. Their sleek looks are matched by clean, cutting sounds and they would fit into many musical situations.

Though only a recent arrival in the AAX series, Sabian's V-Crashes have been in existence for some time. Originally designed in 2005 for the Vault Series, the V-Crashes were repositioned at the start of 2012 when the Vault Series was disbanded.

Primarily a repository for more creative and one-off designs, the Vault Series had become crammed with a selection of unique and often wildly different models. Sabian felt that the degree of variation amongst the Vault cymbals meant that there was little continuity to the range and embarked on a reclassification process, matching each cymbal up with the most appropriate existing Sabian series.

It's ironic that the Vault brand had to be dropped because it had become too successful but the majority of Vault cymbals do live on elsewhere within Sabian's ranks. Former rangemates Vault Artisan crashes - an altogether different type of crash - now reside in their own newly created Artisan Series.

While the V in the V-Series refers to the Vault origins of the crashes, the AAX Series' tagline is Modern Bright, and Sabian describes the V-Crashes as being "bright, high-pitched and very cutting".

A corresponding pair of V-Hats and a single V-Ride (again formerly of the Vault Series) are also to be found in the AAX stable. Five V-Crashes are available, in diameters of 16" to 20" with the step up between each model being a single inch.

The move from the Vault Series to the AAX has not altered the design or manufacturing process in any way and each cymbal is individually cast from Sabian's B20 bronze. V-Crashes are only available in brilliant finish and, although thin, claim to punch well above their weight in volume terms whilst also boasting a quick response.

Picking up each cymbal, the thinness is immediately apparent, but unlike most thin cymbals they don't flex easily - there is obvious tenacity to the bronze. The two smallest cymbals - 16" and 17" - have average-sized bells; from 18" up to the largest 20" cymbal, the bells are proportionally bigger and far more pronounced. This makes the profile of the cymbals deeper, guaranteeing more volume and cut.

The top of each cymbal is circled by a large number of small hammer marks arranged in orderly bands that start just outside the bell and continue all the way to the edge. Similarly tight bands of lathing flow over the entire surface of each cymbal on both sides, with the exception of the smooth underside of each bell.

Cymbals that are designed to be cutting often have a degree of brittleness present in their tone as a result, but there is little of this to be found in the V-Crashes. From the outset there is a pleasing smoothness to their sound and some unexpected warmth too.

The centre hole-to-edge lathing and brilliant finish ensures a silvery and glassy response - unsurprisingly there is no earthiness or complexity on the horizon - just sweet toppiness. They open easily, particularly the smaller diameters where a casual flick of the stick produces an instant reaction. Their inherent smoothness means that though they do punch through, they do so without grating - almost sliding across the mix.

As the initial crash fades it's replaced by a deeper and more prolonged sympathetic note. In isolation it's easy to distinguish between the two and hear the take up point, but in a playing situation the whoosh of high frequencies is all that comes across with any meaning.

The 16" and 17" V-Crashes come to sparkling life with ease and could grace many settings where quick, bright punctuation is required. From the 18" model upwards things take a distinct turn for the louder, with each increase in diameter notching up the volume further.

While the 18" model is pretty full-on, the 19" and 20" are staggeringly powerful crashes that beg for a big stage on which to be unleashed. Despite being capable of such huge volume, their sweetness makes them dangerously playable.

Time spent in their company without ear protection will leave you using the word 'pardon' for some time afterwards.