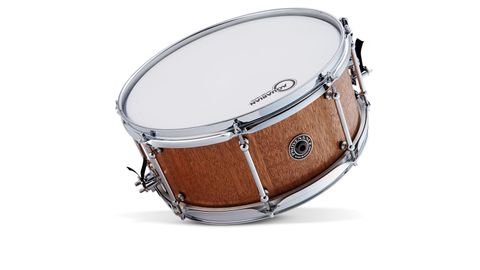 Regardless of its origins, this is a beautifully crafted, fabulous-sounding drum. Adding in the historical resonance of its wood takes it to another level altogether.

Tim Broughton made his first snare in 2008 by melting down and recasting the cylinder head from a 1982 Rolls Royce V8 engine. Tim's high regard for vintage engineering and strong environmental beliefs informed his decision to build drums from materials that have already enjoyed a long and happy life. What started as a home project has since expanded into Provenance Drums.

Tim and his team create one-off snares from machines that inspire them whilst offering custom orders to drummers able to supply a suitable object ripe for transformation.

Tim has tapped into an established network of restoration enthusiasts from which he sources historical artefacts to convert into drums. His keen interest in British aviation and motorsport has seen him cast metal-shelled snares such as the F4 Phantom Snare and Bentley Piccolo snare.

But wood can also be reconfigured into drums and the 14"x6" Ark Royal snare sent for review is made of decking retrieved from the decommissioned Royal Navy aircraft carrier.

As with many small bespoke drum builders, trying out a Provenance snare is not quite as straightforward as popping down to your local music store. However Tim does travel to drum fairs across the country, and a selection of his snares can be found at Colchester's Sound Attak.

The wood is lauan, also known as Philippine mahogany, which crops up on some vintage kits and has more recently been put to excellent use by C&C Drums.

On delivery, the decking still had fixing bolts puncturing the timber at regular intervals but as Tim had already decided to build stave shells (cutting the wood into segments and gluing them into a cylinder before turning it on lathe) this wasn't an issue.

The finished shell is a comfortable 12mm thick with the grain of each stave running vertically. The rounded 45° bearing edges and 3mm-deep snare beds have been cut and finished by hand while the natural, non-glossy finish is the result of a four-coat process of French Polishing (inside and out) with much sanding in between.

It's a beautiful shell, built with fastidious care from handsome and well-seasoned wood. The eight chrome tube lugs are a minimalist presence, leaving a largely uncluttered view of the light-hued lauan. Triple-flanged 2.3mm hoops, a Dunnett R4 strainer and butt-end, Puresound wires and Aquarian heads complete the drum.

HMS Ark Royal was the Royal Navy's flagship for over 25 years until its retirement in 2011 so the main ingredient of this drum has circumnavigated the globe countless times.

Placing it on a stand we're only too aware of its heritage and wonder if we'll be gripped by an uncontrollable urge to play 'A Life On The Ocean Wave'. Thankfully instead we're immediately struck by the sweet, succulent note that emerges from the first exploratory tap.

Stave shells are renowned for a pureness of tone - a fraction of the glue is used in comparison to an equivalent ply shell, the wood is unstressed rather than bent into a round and the vertical orientation of the grain transfers energy (and therefore sound) swiftly. This drum combines these qualities and delivers the sonic equivalent of a double shot of rum chased down by a faceful of sea spray.

Tuned up, the satisfyingly fat 'pop' that rips from the snare practically ricochets off the walls. The allocation of eight tube lugs gives the shell freedom to resonate while a strong woody fundamental anchors the note.

Taking the tuning down to lower tensions reveals a deeper and broader note, but one that remains crisp and urgent. The thickness of the shell means that overtones are largely absent but this leaves you able to appreciate the drum's response in all its glory.

With the tuning anywhere in the vicinity of the sweet spot it simply sings and its mixture of attack and swelling note would put a clean hole through any mix. Sensitivity is excellent right into the edges and its dynamic response, from the gentlest of strokes to the heaviest of blats, is conveyed accurately.

Cross-sticking brings a fat, woody clonk; rimshots enliven the proceedings with the sort of power that in years gone by could have decided the outcome of a naval battle.