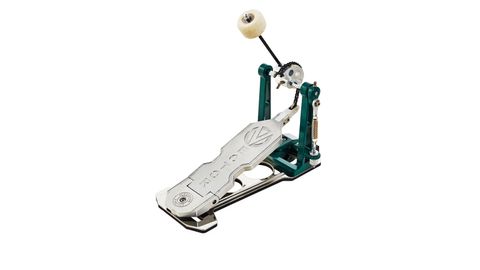 We have to confess that we approached the Vector pedal with a degree of cynicism. Having since spent quality time with it we believe that it offers a genuinely new angle in kit dynamics. Though it's not cheap, it could change the way you play - for the better - forever.

Percussion Kinetics' Vector G3 is a radical new pedal that claims to improve the drummer's stance across the entire kit. The brainchild of Swedish-born Berklee College alumni Goran Kjellgren, the concept is based around his desire to benefit not just the foot action but the playing experience as a whole.

For years, Goran was bugged by what he considered to be his unbalanced playing stance. Being right-sided, he planted his right leg square-on to the bass drum, turning his left side towards the hi-hat. Sounds familiar?

To Goran, this positioning seemed fundamentally flawed as it inhibited fluidity across the kit, especially on the right-hand side. He felt the solution lay in a more ergonomic stance: what if the right foot could be placed off-centre, allowing the drummer to face forward with equal access to both playing sides?

The Vector pedal is Goran's attempt to solve this conundrum and enable the drummer to place his feet (as on a clockface) at five-to-one rather than ten-to-twelve.

Ruggedly handsome, the G3 sits on a polished stainless steel baseplate which widens dramatically at the hinge end, providing the most obvious visual clue to the pedal's capabilities.

It houses a slot which allows the heel end of the footboard to slide through a full 10cm of left/right positioning. Adjustment is simply a question of loosening off the single Allen key bolt; once in its chosen position it locks tightly thanks to a hefty jaw clutch.

Offsetting the footboard on its own is only a partial solution; in order to maximise the effect, the cam can also be slid along the rocker shaft. On a regular pedal the chain would struggle to cope with such a diagonal slant; the G3 incorporates a spherical bearing into the top of the footboard which moves in three planes, ensuring that the chain always hangs straight and turns smoothly.

It is for this reason that the G3 uses a single-width chain - Goran reckons that, while it would be possible to fit a double-width chain, it would be sluggish and less responsive. The beater holder can also be slid along the rocker shaft, so wherever the pedal footplate is angled the beater is always hitting the centre of the head.

In addition, the pedal clamp can also be moved along its own axis, allowing even more positioning flexibility. Conspicuously absent from the G3 are threaded spikes to prevent pedal creep while the footboard angle (up and down) can only be altered in conjunction with the pitch of the beater (ie: not independently).

A left-hand version of the pedal - where the cam and beater holder swap places - is available, while a double version is reportedly under construction.

Setting up the G3 we're struck by how smooth and quiet the action is - in conventional alignment it feels solid, accurate and quick.

Applying some adjustment - by moving the heel end leftwards, raking the cam (and with it the top of the footboard) to the right and sliding the beater over to the left - it loses none of these qualities. Considering how disjointed the components appear - slewed footboard and beater shaft nowhere near the cam - the response is both razor sharp and silky smooth.

But according to Percussion Kinetics the whole point of the G3 is that its influence spreads all over the kit. Advocates of the pedal speak of an instant moment of conversion when everything clicks and falls into place.

For us it's more of a gradual realisation, as though the years (well, decades actually) of our embedded stance and technique can only be unlearned slowly. During our first session with the G3 we catch my foot straightening out (ie: pointing back towards 12 o'clock) several times.

It's only after more prolonged exposure that we feel completely settled with the new layout and are able to concentrate on simply playing; we notice a new lightness in our efforts, an ease of execution that wasn't there before. Sometimes the smallest of tweaks can reap the healthiest of rewards