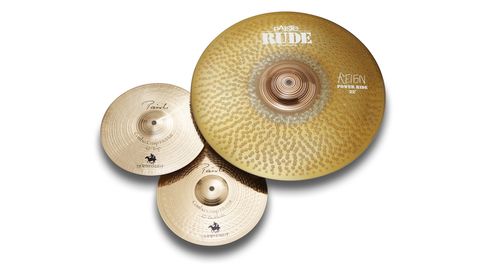 There are few more deserving drummers for a signature line than Lombardo, and this ride hits as hard as the Slayer icon.

Dave Lombardo's pioneering thrash beats make him the perfect candidate for his own signature cymbal, and that's exactly what we have here.

Lombardo achieved fame with Slayer in the 1980s when he and the band pioneered speed/thrash metal; 1980 also saw the advent of Paiste's Rude cymbal series, aimed at metal and punk players. In 1986 Lombardo played Rude cymbals on Reign In Blood, and in recognition of this his 22" Rude Power Ride is called The Reign.

Paiste's Rude cymbals were from the beginning aimed at metal and punk drummers. The Rude title refers to the unlathed surface. Lombardo's Reign ride is a 22" titan, with smoothly polished unlathed body, pock-marked with irregular hammering top and bottom, excepting the bell which is lathed with a broad knife. Cymbals are hand-made in Switzerland using Paiste's B8 bronze (CuSn8), also known as 2002 alloy.

This is one of those cymbals that requires you to lay-in with a heavy stick. This way you get the full effect of the loud and shrill attack.

But it too has a surprising soft warmth underlying the undeniably aggressive intention. In fact if you crash it you get a huge, deep, satisfying roar.

A single hard tap to the body of the cymbal unleashes a clamorous tolling bell character. Leave it to resonate and revel in the long sustain surrounded by a full tone that is quite clear and diminishes uniformly without unduly clashing overtones. In other words a typically clean Paiste sound, pure but with ample scale.

Pounding out no-messing, driving eighth- note ride beats, the attack is undeniably intense and toppy, but is balanced by that high-pitched yet warm background wash. Part of the blueprint for extreme heavy rides involves increased bell sizes.

But this sometimes means that playing these oversized bells can be like clouting an anvil, resulting in a dead, wrist-jarring 'ting' if you don't catch them just right. Paiste seems to have avoided this by lathing the bell so that it remains resonant while benefitting from its size in terms of volume.