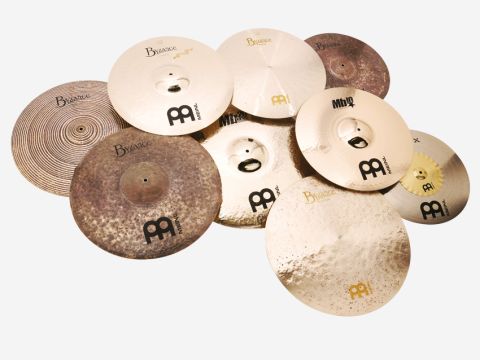 These rides offer unquestionable insights into the inspiration and style of the signatory.

Meinl's Perfect Ride range includes contributions from some of the company's highest-profile endorsees. Each drummer involved has a clear idea of what they require in a ride, so each of the 11 cymbals in the range varies in size, weight, finish and sound.

While the cymbals are not named after the drummers, their titles give away the artist behind the commission. Rhythm was sent nine of the 11: six from the Turkish-made Byzance range, and one each from their Mb20, Mb10 and Generation X ranges.

Weighing in at almost 5kg, Chris Adler's 24" Mb20 Pure Metal ride is quite possibly the final word in metal rides. Playing on the outer regions of its diameter gives an extremely bright and hard-sounding ping.

Moving in from the edge, the inﬂuence of the bell soon shows, with a metallic note hammering through. Once the bell is reached any wash has evaporated, leaving a tinnitus-inducing clang that can be heard several streets away.

The 21" Serpents ride is built to Derek Roddy's specs. Beneath the finish, the surface is busy with lathing bands and hammer marks and a graphic of a curling serpent. It's a deft cymbal that possesses a tight stick sound and responds swiftly to changes in dynamics.

The bell is more dominant, separate in tone and character to the rest of the cymbal.

Rodney Holmes's 22" Byzance Dark Spectrum ride is heavily hammered and has a spiral lathing pattern with raw cymbal showing beside the grooves. Appropriately, as the name hints at an appreciation of jazz maestro Tony Williams, it delivers a dark, lush sound that's perfect for rattling out rapid fire triplets.

Its smoky warmth extends to the bell.

Also from the Byzance Dark stable is Trevor Lawrence Jr's 22" Stadium ride. Underneath it's lathed and buffed with the top minimally lathed, heavily hammered, and crowned by a large bell. The fat stick sound is surprisingly bright but also has dark and slightly trashy elements.

The bell is clean yet earthy.

The 19" Byzance Dark Sky ride is the signature ride of Japanese drummer Noriaki Kumagai. Despite having one of the smaller diameters on offer, it's quite a thick and heavy cymbal. The surface is pock-marked from numerous hammer blows and has been left unfinished.

It gives a high-pitched stick sound over a small amount of wash. The metallic edge that's present enables the cymbal to project without having to rely on sheer force.

German jazzer Wolfgang Haffner has his signature on 20" and 22" Byzance Jazz Club rides. Flat rides with deep hammering and four rivets, they've been designed with lower dynamics in mind. Supremely responsive, they capture every stroke faultlessly.

There's an inbuilt smoothness to them however hard or fast you play. The wash never rises above the gentle sizzle generated by the rivets, enabling the warm, woody stick sound to shine.

Shadows Fall's Jason Bittner's ride of choice is a 20" Mb10 Bell Blast ride. Featuring a prominent bell, the cymbal is medium/heavy and highly polished. Played on the bow, the cymbal is high-pitched and focused.

The small amount of wash leaves sticking patterns to be reproduced cleanly. At the large bell, the cymbal cuts across pretty much anything.

Acclaimed clinician Johnny Rabb played a big part in the design of Meinl's Generation X range. His unusual 18" Safari ride is a two-part cymbal, made up of an 18" ﬂat ride upon which sits an inverted, crimped-edge 8" splash.

Fitting the splash on top chokes the cymbals so there is very little sustain.