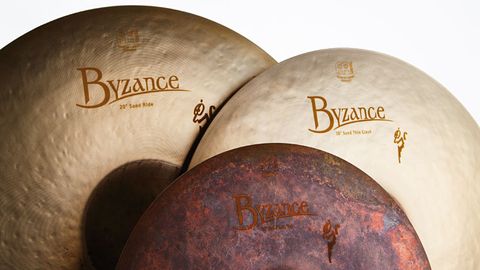 Benny Greb and Meinl have created a range of highly musical cymbals that complement each other as a set. Their vintage charms will be lost on hard hitters, while their labour-intensive production makes them reassuringly expensive.

Part of Meinl's Byzance Vintage series, Sand cymbals have been designed to the specifications of German wunderkind Benny Greb.

This matched set contains a pair of 14" Sand hats, a 20" Sand ride and an 18" Sand Thin crash. While the Sand hat and ride were both released in 2011, the Thin crash is one of four new models launched this year; the others being an 18" Medium crash, 22" Sand ride and a riveted 22" crash/ride.

All Meinl Byzance cymbals are individually cast from tin-rich B20 bronze in Turkey. After being rolled, the Sand cymbal blanks are then transferred to Germany and Meinl's state of the art factory.

Here the cymbals are hammered, lathed and sandblasted to precise tolerances, with not one, but two master reference cymbals for each model.

The sandblasting process creates a semi-matt sheen that is similar to an age-induced patina. Each cymbal is peppered with hammer marks and, bottom hi-hat cymbal excluded, is thin enough to flex willingly between the hands.

While the heavier bottom cymbal of the Sand hat is lathed and polished, the top cymbal is left unlathed and raw, neatly reversing a common hi-hat pairing arrangement. The hats have a warm feel and are capable of a wide range of expression.

At low dynamics they are almost feathery soft, responding deftly to the merest touch. Played into, they become more assertive, striking a perfect balance between defined and meaty. Relaxing the pedal finds them spreading to a sloshy wash.

The 18" Thin crash is supermodel thin and opens easily before decaying rapidly. The sound is bright, edging towards china territory in its attack, but with a mellower run off.

The 20" Sand ride is the original Sand cymbal. As a ride, it gives a tight, clean stick sound. The bell is juicy and the cymbal opens to crash readily, leaving an expansive decay.