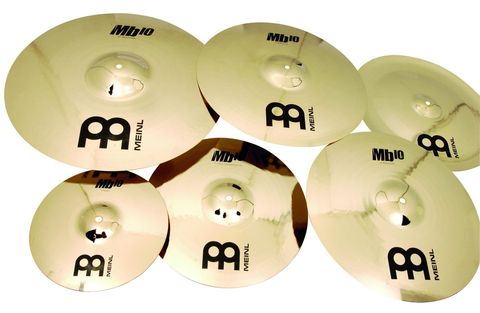 These are simply very impressive cymbals on which an awful lot of effort and research and development time has been lavished. The sales arena in which the Mb10s have to duke it out is among the most competitive in the industry, so you would expect the ever-improving German brand to come out with a cracker. The surprise is perhaps just how good they are.

One area of cymbal-dom that has improved beyond expectations is the ‘just under mid-range´ category. Of course, brands are constantly refining their flagship ranges too, but this frequently takes the form of fiddling around the edges rather than taking quantum leaps in quality.

Expensive cymbals have been very, very good for a long, long time, so while posh ranges may change according to taste and fashion, they tend to conform to long-established standards. More affordable cymbals, on the other hand, now impress more discerning players.

Previously (ie through the ´70s and ´80s) it was a case of budding budget-conscious drummers having to put up with what they could afford until they hit the big time and could splash out on a set of Ks or what-have-you. All too frequently, pocket-friendly cymbals were slightly underwhelming - unsophisticated things that got the job done, but did little to enchant the ear while they were doing it.

Really high-end stuff might outperform the mid-range lines, of course, but there is now little reason to be snobby about less expensive metals. Now let´s see how Meinl´s much-trumpeted, well priced Mb10s fare…

The 90 percent copper, 10 percent tin base materials are formed into shape and ultimately treated to some extensive but very fine lathing and a seriously high polish finish. It all fits in very much with the range´s stated aim, which is contemporary, attention-grabbing sounds.

While we are all for choice, the number of cymbals contained in certain current series can often be pretty overwhelming. But usefully - both for the purposes of this review and for making purchase decisions easier - Meinl has opted to limit the number of instruments bearing the Mb10 tag to a sensible level.

There is just one hi-hat, the Medium Soundwave in the range (available in 14" or 15" sizes), accompanied by seven Medium crashes (from 14" to 20"), 20" and 21" Medium rides, three splashes (8", 10" and 12"), 17" and 19" chinas and, to round out the series, Jason Bittner´s signature 20" Bell Blast ride. Aside from the latter, the word ‘medium´ crops up a great deal in the Mb10 series. Which might well lead you to the subconscious feeling that this little lot are a bit on the middle-of-the-road side, a bit ordinary, but that is not the case at all…

Even though the Mb10 line-up in its entirety isn´t ridiculously big, it means more time with each model, which is always welcome. So what we ended up with is a pretty usable set of 14" hats, 16" and 18" crashes, a 10" splash, 20" Medium ride and a 17" china - an array that is as close to a ‘standard´ all-rounder as it is possible to get. One additional little treat was the inclusion of the Bell Blast ride, something we were particularly looking forward to experiencing having heard Mr Bittner wax lyrical about it.

Medium-weight 14" hi-hats seem a pretty tame option these days when you can choose from 12" through to 15" hats in myriad different weights with odd finishes from other makers. But the Mb10 14"s are a bit like a first generation Ford Focus - very much a safe choice but unreasonably good-handling and rewarding to play with. The Soundwaved lower cymbal brings all the benefits you would expect from such a thing; there´s plenty of crispness, fast attack and controllability here along with a very tasty, crunchy half-open tone and a super clean, almost electronic response when held very tightly closed.

Almost anyone could find a use for the two crashes here, either as the bigger, heavier elements of a pop set-up, or as the thinner, less raucous choice for metallers. We loved riding the 18" - the well-judged weight means it´s easy to build and then take down again - and both are quick and bright, but with a clean depth, if a little less edgy and characterful than more expensive crashes with more tin in.

The ‘accent´ cymbals here - the 10" splash and 17" china - acquit themselves far better than this kind of thing would have done back in the day. There´s simply far more tone to hand now. The 10" is silvery and sparkly, and ‘present´ enough to make a real impact if struck with conviction, while the china is focused and crashy, keeping overbearing low-mid-range undertones to a minimum.

It´s not designed for everyone, so we suggest that only the heavy-handed and tough-eared drummers check out the Bell Blast ride. If you fall into those categories though, you´ll admire it - if 20" is big enough for your needs.

Crushing bell tone is a big part of the appeal here, but the muscular ‘ding´ of the bow is also a killer. This is a difficult cymbal to wash, as this kind of thing always is, but it ticks a lot of other boxes. Most of us will be happy with the Medium ride of course - it is versatile, relatively sweet-toned and smooth under the stick and will turn its hand to all but the softest or heaviest situations.