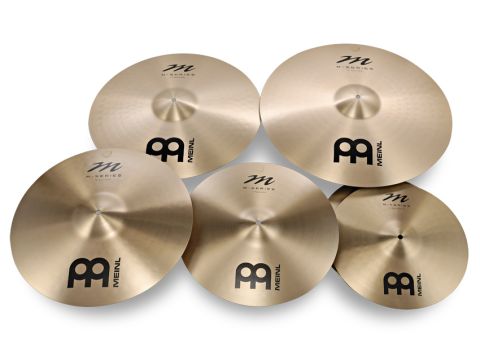 The fact is that a lot of cymbals are made largely by machines today - let your ears do the choosing.

The emergence of Meinl's M-Series - launched at NAMM 2010 - was the culmination of a ﬁve-year-long project.

Regarded by Meinl as a benchmark for all-round professional cymbals, the M-Series is especially signiﬁcant as it is the ﬁrst range of B20 cymbals manufactured entirely in the company's German factory.

Though hardly a stranger to B20 cymbals (Meinl's Byzance range features six different lines of B20 cymbals alone), until now all Meinl B20 models have been made in its Turkish facility.

The challenge for Meinl in producing the M-Series was to create quality cymbals with total manufacturing efﬁciency and model-to-model consistency.

With its higher tin content, B20 is less forgiving to work with than the B8, B10 and B12 bronzes that Meinl uses for existing German-made ranges. B20 also tends to produce richer and more complex-sounding cymbals (which is why so many pro cymbals are made from it), so identical models can have different sound characteristics.

To old romantics, part of the fun of choosing is going through a rack of cymbals until you ﬁnd one that appeals to your ears. Meinl has no truck with such manufacturing discrepancies; the aim of the M-Series is to not just minimise but eliminate inconsistencies.

If Meinl has succeeded, each ﬁnished model will sound virtually identical to that which precedes and follows it. This would represent a huge technical achievement in a process that involves many variables.

In order to guarantee such uniformity, M-Series cymbals are made on a mechanised production line. Rather than being individually cast, the cymbals are cut from sheets of bronze and are both machine hammered and lathed.

The resulting cymbals have a sleek and elegant appearance. Extremely ﬁne bands of lathing extend from the centre holes to the outer edges on both sides of the cymbals with tidy patterns of hammering just visible below.

The Meinl and M-Series logos are reproduced simply in black; their modest size means that there's little to distract the eye from the warm sheen of the bronze.

On review is an example of each of the Medium designated models - 16" and 18" crashes, 14" hi-hats and 20" and 22" rides. Until recently these were the sole M-Series cymbals available. They have now been joined by Heavy models in all diameters except 22", along with 13" Medium hi-hats, a 10" splash and an 8" effects Bell.

The pair of Medium crashes give bright but controlled responses, with any opening aggression being tempered by unmistakable smoothness.

There is enough metal present to allow the crashes to carry with ease and the silvery tones they project tend to slide across the mix rather than bursting holes in it.

Each crash ﬂows into a notably clean and harmonious decay. While there isn't a great deal of complexity to be discerned, there is plenty of B20 warmth present in their well-balanced sound.

The 14" Medium hi-hats bring together a markedly heavier bottom cymbal with a medium weight top (1,400 to 1,100 grammes). This is intended to give them a strong presence and also encourage a fat sound.

They certainly possess natural volume and as they are pitched fairly high they have no trouble being heard. The same smoothness audible in the crashes is present here too, so there's nothing grating about their response.

Variations in dynamics are catered for superbly, with delicate low volume work being reproduced particularly well. The one area where they didn't shine to quite the same degree was being thrashed full-on - they're just too precise a pair of hats for that.

The 20" Medium ride gives a clearly deﬁned ping over supporting wash. Moving onto the bell, the sound focuses into a ripe metallic peal. There is a distinct clarity to the cymbal's response, which is further embellished by a lack of competing overtones.

The 22" Medium ride is not quite as clean a cymbal; the stick sound is slightly warmer and the wash a little busier. It's still a well-behaved, largely unambiguous cymbal that would be easy to live with.

The M-Series can probably lay claim to being the most high-tech manufactured cymbals in the world, and the standard of the review cymbals is impeccable.

In performance terms, the M-Series conforms to a European cymbal sound - sparkling clean, overtone-free and warm without being trashy- and does it well.

As Ralfe Gustke demonstrates on Meinl's website, M-Series cymbals record impressively. Some purists might point to a lack of human input in the manufacturing (though ﬁve years' R&D would clearly require a lot of decision- making).