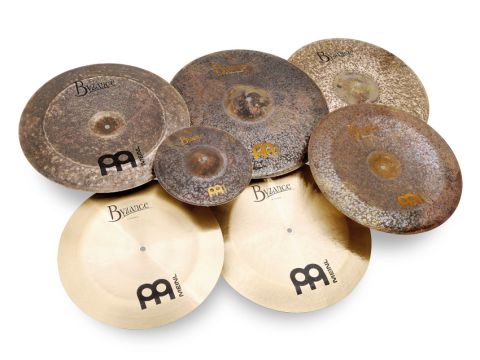 Every cymbal here is entertaining; any of them will add exotic shades to your set-up.

For half a century Meinl epitomised the European style of so-called sheet bronze B8 cymbals. In order to penetrate the American market, Meinl took a crucial step in 2000 and opened a factory in Turkey, home of the traditional cymbal. And in 2001 Meinl launched its Byzance range.

Byzance cymbals were a radical departure for Meinl, entailing time-honoured Turkish hand-hammering skills and cast B20 bell-bronze alloy. Byzance cymbals are transported back to Meinl's HQ in Germany for finishing and marketing.

The selection we have here are 2010 additions to what is already an extensive range. This range encompasses six sub-series: Jazz, Traditional, Dark, Brilliant, Extra Dry and Vintage.

The review cymbals fall into three of these categories: Traditional, Dark and Extra Dry.

Byzance cymbals have remarkable looks. First there are the 18" china and 20" Raw Bell ride from the Dark series. The ride's main surface is completely mottled with dimpled hammerings over a lathed golden brown (top and bottom), while the un-hammered bell has splashes of chalky green, yellow and mauve. Apparently this has to do with "the various re-heating and cooling processes during the production".

The 18" Dark china is just as wild - a mixture of pink and brown, top and bottom!

Turning to the three Extra Dry models - a 20" Thin crash, 10" splash and 18" china - they are similar to the Dark series on the top surface, but are lathed to a shining bronze-gold on the underside with larger hammerings.

The mottled tops again have all sorts of colours - browns, golds, olives… the splash even looks purple in certain lights.

The two remaining cymbals are Flat chinas from the Byzance Traditional series and are more conventional in appearance with the familiar B20 rich golden-bronze colour, completely lathed surfaces and very light hammering. As the name suggests, they have relatively flat profiles with just a slight upturn and no bell.

The 20" Dark Raw Bell ride has indeed a raw feel to it, quite a hard stick sound. There's no great spread, the stick sound being clear and dark. It's a medium-heavy cymbal you can lay into and it will go with you, powerful but not washy, with good projection.

The crash is full and sweet but doesn't impede the forward movement. The bell is penetrating, sitting comfortably with the overall sound. This is a versatile ride which both rock and jazz drummers will warm to.

The 18" Dark china has the deepest pitch of the four chinas here. The sound is ominous, Oriental, thick, deep and meaty. You can get umpteen variations by striking at different places on the surface - from the edge whoosh to the clanking upturned brim to the brighter centre and the tinkling small bell.

The Traditional series 16" Flat china is abrupt, great for biting accents, with a high-pitched, coruscating smash, like dropping a large saucepan lid on a tiled floor. The 18" is similar but deeper with more sustain, although still relatively terse. With more mid frequencies, the timbre is smoother.

The clarity of tip stroke makes this a decent ride too. Overall it has a thinner and more silvery sound than the two other 18s. And lacking bells, both Flats have less power than the other chinas.

Now for the Extra Dry trio: the 20" Thin crash, 10" splash and 18" china. Thin is an understatement - this is probably the thinnest sounding 20" crash we've played. So responsive you can crash the body of the cymbal with a small stick tip. You can even crash the bell, which results in a broad-edged 'pahhh'.

You'd have to be the world's lightest player to ride it. It's ultra-sensitive then, with a trashy, sizzling, shimmering, gorgeous sound.

Likewise, the 10" Extra Dry splash is wafer thin. Many 10" splashes chime like a cheap dinner gong, crude at close quarters. This one is so thin there's none of that, it's all sizzle and 'tiss' with absolutely no 'ding' in it. It spits and hisses.

Both cymbals being this thin, you need to take care not to buckle them. They respond best to a soft-medium whack, not too heavy or it spoils the effect, although the 20" does seem remarkably robust.

The third Extra Dry is an 18" china. It's dry and fast - sustain is shorter than with the Dark 18" - and has a powerful, attacking 'pang'. It is the highest pitched of the four chinas - whack it on the edge and it's decidedly brash with that original china-type, dustbin-lid trash sound.

These recent Byzances include some of the most extraordinary-looking cymbals with fantastic, beautiful colours. But more importantly they are also colourful sounding. There are four chinas here and they all sound quite different. Who'd have thought china-types would end up being so diverse?

Diversity is what the Byzances are about. With Sterling low against the Euro they are expensive, which is a shame as they're top notch and you really should hear them.