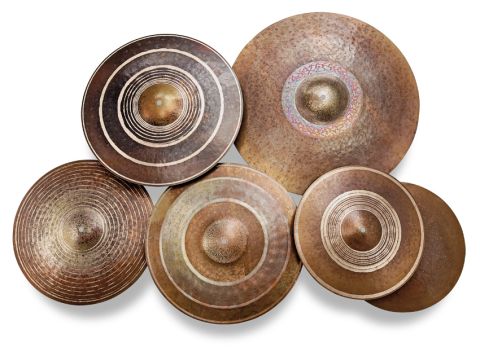 Hopefully this is just the start for an exciting new name in cymbals.

Matt is inspired by "the organic shapes of the natural world, harder geometric shapes" and he's also interested in the art and symbolism of ancient civilisations. Today though we have some relatively conventional (well, they're round) cymbals.

All this is somewhat different from most other cymbal companies. Matt, for example, hand-hammers his domed cups, whereas the big companies press them using special machinery.

He does, however, use modern materials - B5, B7, B8 and B15 bronze - and in this he is more in the European tradition of Paiste and Meinl.

Matt says he treats his cymbals like works of art, and the result is that the cymbals we have for review are unlike any other. Each example looks different, but they have in common a smooth satin-brown surface which is broken up by sparse bands of gold lathing, the pattern of which varies on each cymbal.

Except, that is, for the ride which has a decorative purple-gold-blue patterned band around the edge of the bell, and what I can only describe as gold squiggles on the underside.

The 17" crash has a Saturn ring of a greenish tinge. The colours reminded me of Meinl's Byzance cymbals which also have greens and purples, though Byzances are B20 alloy. Each cymbal has a different degree of sparse hammerings, again all done by hand, and there are no ﬁne concentric lathing grooves like on most cymbals.

Just as the cymbals look different, they sound different, though not so much that they cannot be used in all manner of conventional musical settings.

Of the three crashes sent for review, our favourite was the 17" Thin Dark crash. Not only is it made from a slightly unusual B7 bronze, it's the thinnest and the difference this makes to the timbre is surprisingly marked.

It's fast yet supple and deep with a short sustain, a dark and mysteriously explosive 'bish'. By contrast the heavier 16" and 18" are both designated Medium Dark and made from imported German B8 bronze.

They're a little more familiar-sounding, of medium pitch and sustain, not quite so sparkling as, say, Paiste's 2002 series B8s. We put this down to the absence of the usual tight lathing found on most conventional cymbals.

But side-by-side with 16" and 18" B8 2002s they are just as powerful. They differ in being darker of timbre and more Zildjian in their roundness of tone.

The 22" hand-hammered Medium ride is also B8 bronze. Paiste was the pioneer in B8 as a professional quality cymbal alloy back in the 1950s and 1960s. And as it happens, Matt's ride reminded us immediately of a

1960s 20" Paiste ride. It also shares its slightly orangey hue. There's an alluring, wiry zing in the tone that we've not heard anywhere else.

The stick tip response is super clear and lively but not hard; there's a clean 'tick' quality with a spongy give underneath and a controlled spread with a seriously deep tone.

The large-ish 6" bell has a fresh, penetrating tone, but again is warm rather than brash.

The set is completed by a pair of 14" B8 hi-hats, which comprise a medium-weight top over a heavy bottom. The heavy bottom ensures that when you open up and shoulder the cymbals for a loud 'shoop' there is plenty of bite and volume. But when closed or playing jazz-style, open-closed 10-to-10, the top cymbal's softish, low pitch is inevitably short on attack.

This will appeal to those who want something controllable and not too abrasive, but will be found wanting by most aggressive rock or metal-style players. For everything else - jazz, indie, folk, funk - where a complex warm tone is appreciated, and you want to be able to control dynamics and occasionally play softly, this pair is certainly worth checking out.

We really enjoyed these cymbals. It's always refreshing to encounter instruments that are genuinely different from the pack. And individual British cymbalmakers are rare.

The hi-hats may be too restrained for some, while the 16" and 18" crashes are closest to more mainstream cymbals on the market. For us, the 22" ride and the 17" crash in particular were special. They are expensive, but we're talking rare instruments, which are also beautiful-looking.