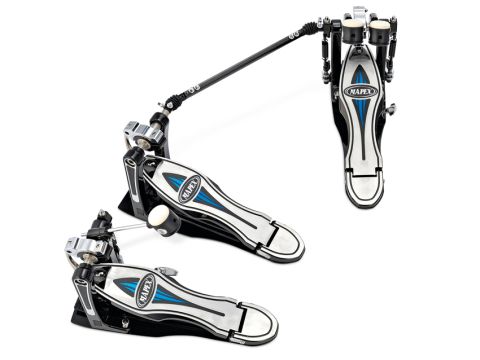 The direct drive option makes what is already a great pedal even more desirable.

The arrival of Mapex's Falcon pedals last year raised the company's profile at a stroke. Combining innovative design with pro specifications and user-friendliness, the Falcons are now competing strongly at the top end of the pedal market.

Initially available as a chain-drive pedal with an additional strap-drive option, direct-drive single and double Falcons have now been released.

As well as being fitted with the direct-drive linkage, the new pedals are shipped with both chain and strap-drive alternatives, plus the two cams (glide and pursuit).

Not to leave out drummers who already own a Falcon, Mapex is also making a direct-drive conversion kit available as an add-on in its own right. The provision of direct-drive has not required any redesign of the Falcon's architecture; retro-fitting the direct-drive linkage to a chain-driven model takes only a few minutes and requires no more than a drum key.

All other aspects of the pedals remain the same, with the slim and elegantly sculpted footboard providing a striking outline.

Playing a spring-drive pedal you can sense the physical link between the footboard and the beater. Direct-drive is aptly named as it really does seem like your foot is connected straight to the beater - just a wiggle of the toes is enough to swing it towards the head.

While the feel is super-fast and the action is almost devoid of friction, getting the best out of a direct-drive pedal requires both discipline and controlled technique. It's not as forgiving to play as a spring-drive and simply stamping on the footboard with all your might won't exploit the amazing speed and smoothness on offer.

The difference between spring and direct drive is a bit like hitting a punchbag while wearing boxing gloves to then going bare-knuckle - you can't beat the feel and closeness but a mistime could leave you wincing in disbelief.

Both of the pedals responded to our footwork instantly and executed everything fluidly and seamlessly. The double pedal felt perfectly balanced, to the extent that it was genuinely difficult to tell the two sides apart.

They were also incredibly quiet - when not connected to a drum, the zen-like silence in which they performed was at odds with their frantic movement.

Direct-drive pedals are definitely in vogue at the moment. Behind the trend is the fact that such pedals can offer a superior feel and action over their spring-driven counterparts; if you've got smooth technique then a direct-drive pedal can feel as though it's not there.

These Falcons are more expensive than existing versions of the pedal, but the price difference is roughly that of the direct-drive conversion kit (twice in the case of the double pedal with its two direct-drive linkages), which explains the extra cost.